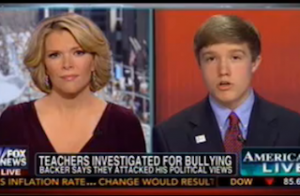 15-year-old conservative Benji Backer recently wrote an article for Tea Party group FreedomWorks in which he described chronic bullying from high school teachers who disagreed with his political views. Today, he appeared on Fox News with Megyn Kelly to share his story and urge school boards around the country to prevent what happened to him from happening to other young Republicans.

Backer described some of what he found to be the worst incidences of harassment at the Wisconsin high school from which he has since transferred. He said that he English teacher argued with him about Mitt Romney and Governor Scott Walker made comments about how, as a teacher, he worked harder and deserved a higher salary than Backer’s parents. When Backer told the teacher he had complained to the principal, the teacher told him he “didn’t give a s-h-i-t,” which “totally shocked” the student. “It’s scary to stand up to a teacher,” Backer added, “because they can judge you and they’re ultimately in charge of your future.”

When Kelly asked him where he “finds the courage to take a stand,” Backer said that he’s not speaking out about this issue for himself but rather for all of the other young students around the country who are afraid to share their political beliefs. He said that his main goal is for school boards across the country to “start a rule that says politics should be left out of the classroom and in that case, only in government classes should politics be talked about,” adding, with an echo of the Fox News slogan, “in a fair and balanced way.”