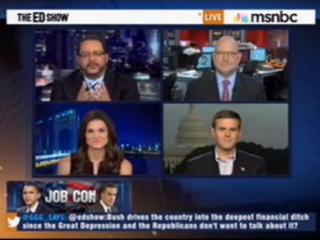 The commentators on tonight’s Ed Show (guest hosted by Michael Eric Dyson) unanimously agreed tonight that attacking President George W. Bush during this campaign would not be a winning proposal for President Obama. But the situation got a bit outnumbered for Guy Benson as the other three panelists tried to convince him that it was Congress, and not the President, who deserved the blame for the sluggish economy, something he persisted over objections to argue did not let the President off the hook.

RELATED: The Ed Show Debates Whether Nas Should Give ‘Real N*gga’ Gwyneth Paltrow A Pass

“I don’t think we should be running against Bush for President,” Jimmy Williams noted, because people “know that was a debacle.” Krystal Ball agreed, adding that focus groups recently have proven people already dont like President Bush, and now the Obama campaign must argue, as he had “made the case,” “that Congress has been obstructionist… we need to be more forceful in pushing that point.” Williams and Ball made the point that the number of filibusters in Congress had skyrocketed since President Obama was in power.

Benson replied that what they had just said was “obstructionist canard language,” and that President Obama himself had said several years ago in a Today interview that if he did not fix the economy, he would not win reelection, so “pointing the finger totally contradicts his whole slogan.” Ball replied that the obstructionism made sense because Republicans “have every inventive to do everything to prevent the economy from growing,” if they want to see the President lose. Dyson agreed, adding, “obstruction is easy” and Republicans “out of their own mouths have said that” they wanted to stop jobs bills from passing.

“Of course Republicans want to beat a Democratic incumbent, stunning,” Benson replied dryly, adding that the jobs bill Dyson and Ball had brought up failed in a Democratic Senate. “The White House is pretending the first half of this presidency didn’t exist,” he added, to protests from the rest of the panel.