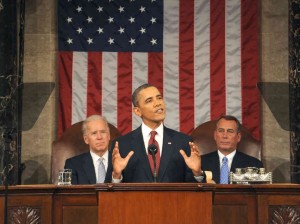 This is an article from LawNewz.com, a new Abrams website covering law and crime launching soon.

If recent history is any indication, the three most conservative Supreme Court justices — Samuel Alito, Clarence Thomas, and Antonin Scalia — will not attend tonight’s State of the Union Address tonight. How do we know? Well, we don’t for certain, but if recent trends prove true then don’t expect to see them in the audience.

“I will be willing to a wager a month’s salary that they will be nowhere near it. They’ve referred to it as ‘pep rally’, they will only come if they lost a bet,” Dr. Todd Peppers, who studies the Supreme Court at Roanoke College, told LawNewz.com.

Peppers co-authored a fascinating study which documented the dwindling attendance of the justices. From 1965 through 1980, the attendance rate was 84 percent. Over the next two decades, the number fell to 53 percent.  And in the 2000’s, for three years, only Justice Stephen G. Breyer attended, according to their study.

From a legal perspective, the justices have no obligation to show up.  The Constitution only says the President “shall from time to time give to the Congress Information of the State of the Union.” In our founding document, there is nothing about who should attend, what the President should talk about, or where it should be held.  That said — for decades, the Supreme Court Justices have made it a point to show up. That’s changed in recent years.

According to Supreme Court experts with whom I spoke, including my former Yale Law professor Linda Greenhouse, The New York Times reporter who covered the Court for nearly 30 years, the change started when Justice William Rehnquist was notably absent during one of President Jimmy Carter’s State of the Union Addresses. His explanation was as forthright as it is amusing: He intended no slight to the president, but “it was just that the speech occurred on the same night as his painting class at the Arlington recreation center.”

“I believe it was Chief Justice Rehnquist who freed the justices to not show up… and that was a signal that no one had to go if they didn’t want to,” Greenhouse told LawNewz.com in an email.  And apparently, the justices are taking full advantage of that. (The public information officer at the U.S. Supreme Court has not confirmed yet who will attend tonight).

Maybe the real problem is that the State of the Union has gotten too political and the justices feel too uncomfortable just sitting there. You might recall, in 2010, President Obama took a very unusual step and publically slammed the Supreme Court for the Citizens United decision. Justice Alito was visibly upset, and in full view of the cameras mouthed the words “not true.” Take a look:

“The Justices might feel awkward, because if the President talks about something that might come before the Supreme Court, they might be feel uncomfortable clapping,” Dr. Peppers said.

Or, they might fear the cameras will catch them falling asleep. Yes, that happened last year, when Justice Ginsburg fell asleep, saying she was not ‘100% sober.” But let’s be honest about this, if President Obama were a Republican, like say, President Trump I’m willing to bet the conservatives would be there. Or, well, at least for President Cruz or Rubio.