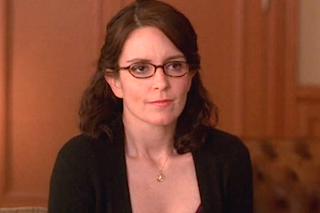 Remember “The Bubble” episode from season three of 30 Rock? It’s the one in which Jon Hamm plays Drew, Liz Lemon’s new boyfriend who’s so good looking that he lives in a “bubble” where nothing bad ever happens. One thing you may not remember is that it also contains one of the earliest recorded jokes about Bill Cosby’s alleged history of sexual assault.

As Crushable’s Jenni Maier outlined in a blog post this week, there is a scene in the episode in which Jack Donaghy enlists a Bill Cosby impersonator (played by comedian Godfrey) to call Tracy Jordan and convince him to come back to the fictional sketch show TGS.

Maier transcribed the scene below:

Jack Donaghy: I’ve arranged for one of Tracy’s childhood idols to reach out to him.

Jack Donaghy: Tracy, this is Jack, I have someone here who wants to speak with you.

Rick: Tracy, this is Bill Cosby…

Liz Lemon: [whispering] Really? This is your strategy?

Jack Donaghy: [whispering and smiling] I heard him do this at a party!

Rick: …I want you to come back to the TGS for the people who like the jokes and the things.

Tracy Jordan: Bill Cosby, you got a lotta nerve gettin’ on the phone wit’ me after what you did to my Aunt Paulette!

Rick: I think you’re confusing me with someone else.

Tracy Jordan: 1971. Cincinnati. She was a cocktail waitress with the droopy eye!

Rick: I’m the guy… with the pudding…

Tracy Jordan: Don’t try to tell me what to do! Heathcliffe Huxtable, wit’ yo’ light-ass kids! Jack! Why would you make me talk to this man?

While it’s possible that the whole thing is some sort of coincidence, it’s far more likely that show creator and writer of this episode Tina Fey was deliberately calling attention to the accusations against Cosby that were first brought to light in 2005 and quickly swept under the rug, thanks to some tricky maneuvering from the comedian himself.

It took another six years and a damning comedy bit from Hannibal Buress to bring the allegations against Cosby back into the spotlight and encourage more women to speak out against him. Maybe if more people had been watching 30 Rock back in 2009, this whole uproar would have happened sooner.