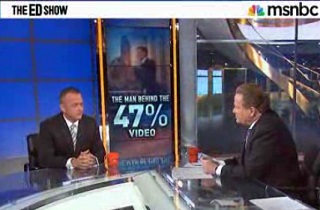 MSNBC’s Ed Schultz scored one of the all-time great political scoops this week when he got to be the first to interview the mystery man who shot the video of Mitt Romney* addressing wealthy donors at a closed-door fundraiser last May. On Wednesday night’s The Ed Show, the world learned a lot about 38 year-old Scott Prouty, the catering bartender who shot the video that has become known as the “47% tape,” including the fact that he was moved to action by a completely different portion of Romney’s speech.

Opinions vary as to the difference Prouty’s tape ultimately made in the 2012 presidential election (in the interview, Prouty gauges it about right, as a well-timed turning point), but the ratio of mystery to interest in it places the revelation of Prouty’s identity among journalism’s great coups. The 38 year-old Prouty shot the video of Mitt Romney’s $50k-a-plate Boca Raton fundraiser on May 17, 2012, watched it percolate on social media for several months, then saw his video become the center of the political universe in September, all the while keeping his identity a secret. He told Ed that once the video became the fulcrum of the 2012 presidential campaign, he resisted offers of fame and fortune in favor of allowing Romney’s words to remain the center of attention.

Over the course of an interview that spanned most of The Ed Show’s hour, Prouty went into great detail about his famous video, and its aftermath, but in my view, the most compelling revelation was that Prouty wasn’t motivated to publish the tape by Romney’s 47% remarks. That passage, in which Romney talks about the “47% of the people who will vote for the president no matter what,” and fairly spits the assertion that they “believe they are entitled… to health care, food, housing, you name it,” is the one that got all of the attention, and came to define the candidate. Lost to the history of this campaign, though, is the fact that the 47% remarks are way down the list of disqualifying things Romney said at that fundraiser.

In the first segment of the interview, Prouty explained that he decided to shoot the video because “the people there that night paid $50,000 per person for dinner. You know, I grew up in a blue collar area in Boston. Nobody I know can pay, can afford to pay $50,000 for dinner,” and added that he felt an “obligation” to shoot the video for all of the people who couldn’t afford to be there. He also described his pique at the way Romney swept into the room and demanded the service of the food be sped up, but it was the candidate’s remarks about a factory in China that sealed Prouty’s decision to go public with the speech.

Ed played the clip, in which Romney described a business trip to a factory in China, and marveled at the deplorable conditions, the “pittance” the workers were paid, and took away a sense of pride in America (and a keen business opportunity). Prouty told Ed it was this passage that tipped him off that “This was not the typical speech.”

“This was the clip that motivated you to go public?” Ed asked.

In fact, it was that clip that first got the attention of the Obama campaign, days before the 47% remarks, or the rest of the tape, blew up. It not only demonstrated a capacity for empathy to rival that of a toaster, but a dangerous streak of gullibility. In recounting the story, Romney comically parroted the ridiculous claims of his guide around the factory, who told Romney that the sniper towers and barbed wire were to keep eager would-be workers out of the factory. That gullibility was a recurring theme in the speech, as Romney also told donors that he believed all a terrorist would have to do to bring the United States to its knees would be to claim he had hidden a dirty bomb somewhere.

That it was the insult of the 47% remarks, and not any of the other, far more disturbing revelations on this tape, that did Romney in says something about our electorate, and the media that informs them. There were substantive problems with those remarks, to be sure, but they pale in comparison to the stunning recklessness he displayed elsewhere in the video.

Here’s video of Ed’s interview with Scott Prouty, in 4 parts: