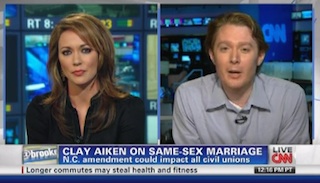 Hey, you guys know me. There’s nothing I love more than to mock cable news channels when they fill time by bringing on random celebrities to discuss the issues. Whether it’s Vanilla Ice discussing the housing market on CNBC or Kid Rock discussing…whatever on Fox News, it always makes for hilarious “news.” So you’d think that I’d be psyched to mock CNN for bringing on American Idol runner up Clay Aiken to discuss North Carolina’s Amendment 1. Really though, Amendment 1 is so damn stupid to begin with that CNN could have hosted a panel discussion between Barney the Dinosaur and a rock and they’d still be giving it more respect than it deserves.

For those that don’t know, Amendment 1 is an amendment that the good people of North Carolina are voting on today. If passed, the amendment will go on the state’s Constitution saying that marriage is only between a man and a woman. The state is spending their time doing this despite the fact that same sex marriage is already illegal in the state. I guess their lawmakers were super worried their Constitution was gonna try and gay marry South Carolina’s Constitution and then adopt Georgia or something.

Anyway, Aiken, who’s both from North Carolina and gay, talked to Brooke Baldwin, pointing out that the amendment will greatly hurt the legal rights of same sex parents as well as unmarried straight parents. He also pointed to polling showing that while voters support the amendment, they also don’t understand what it actually means. Hooray, Democracy! And hooray for cable news! Hooray for us all!

Meanwhile, in the imaginary CNN segment I just made up, Barney pointed out that we should all treat each other with love and respect while the rock pointed out that it’s a rock and can’t say anything. It was a pretty good segment.