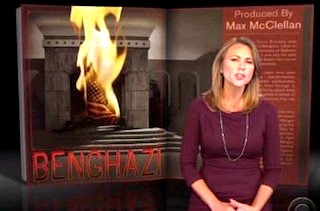 Since 60 Minutes correspondent Lara Logan was placed on indefinite suspension last fall after her piece on the heroism of a military contractor in Benghazi was revealed to have been an opportunistic fiction, the question of how a major news magazine could air such a factitious report has dogged the show.

Joe Hagan‘s long read on Logan and the post-Dan Rather CBS News environment in New York magazine Sunday evening shed some light on the factors that combined into a story that may have taken down Logan’s career.

1. Lara Logan May Not Be Returning to CBS

CBS News head Jeff Fager declined to fire Logan after the Benghazi report, though Hagan reveals that fellow correspondent Morley Safer demanded he do so. But Hagan hints a couple times that Logan’s return is no longer a sure thing:

His decision sent a ripple of discontent through CBS News, prompting questions about Fager’s judgment. And as the months have rolled on, Logan’s return appears less and less certain.

Despite her claims that she tried to preclude politics from entering the report, Logan met several times with Senator Lindsey Graham (R-SC) before the segment. Graham has been one of the main congressional voices advocating continued focus on Benghazi:

The two met two or three times to talk about the Libya attack, with Graham telling Logan that from his point of view, it was “a fair thing to say” that there was a “build-up of Al Qaeda types” in the area—a major talking point for the right in arguments that the Obama White House tried covering up alleged terrorist links.

She consulted with him again after her piece began to unravel:

At one point, Logan called Graham and asked for help. “She called afterward and basically said, ‘What did he tell the FBI?’ ” he recalls. “I’ve never seen the FBI interview, but I talked to the No. 2, who is now gone, and he said that he’s looked at the interviews and the guy never mentioned this.”

You’ll recall that Graham put a hold on Senate nominees after the 60 Minutes report, a campaign that flagged when the story was discredited.

Meanwhile, Logan had been speaking increasingly often about her politics, both on television and in paid speeches, to the point that some at CBS News wondered that the higher-ups didn’t object; they did, but only after the botched Benghazi report.

3. Logan’s Colleagues Viewed Her as a Loose Cannon

Hagan’s piece is chock-full of quotes from Logan’s colleagues throughout her career calling her reckless, sometimes to the point of potentially endangering her crew. “It’s not an accident that Lara Logan fucked up,” one, albeit anonymous, colleague told Hagan. “It was inevitable. Everybody saw this coming.”

Hagan paints her as almost addicted to risk, which he intimates may have in part led to the Benghazi debacle. After she was sexually assaulted by a mob in Tahrir Square, CBS was reluctant to send her back out into the field, instead assigning her pieces on Aerosmith and the like. The Benghazi story, involving both a part of the world and the types of people (military contractors and employees of private security firms) with which Logan was familiar, seemed perfect for her, but it also allowed a shot of risk by proxy. In short, affinity bias may have made this story more attractive to Logan than its merits permitted.

Hagan detailed the confluence of events in CBS News that led to a lack of oversight “perfect storm.” Fager, who liked Logan, was overseeing 60 Minutes; Fager’s policy of relying more on books and movies as source material meant Logan and her producer leaned heavily on Dylan Davies’ book, which they figured was fact-checked; a Fager appointee was in charge of vetting the segment, and “didn’t ask the boss’s star the tough questions”; and the senior vice-president of standards and practice, who reviewed segments before they were aired, had left the company and not yet been replaced. “Logan was free to operate as she chose,” Hagan wrote.

5. So Did the Model of Correspondent-Driven Reporting

Hagan read Logan’s ability to shepherd a piece like this through as part and parcel of a correspondent-driven subsection of the news media, in which an individual’s brand becomes a badge for the quality of their stories, a model upon which 60 Minutes, with its banner correspondents like Mike Wallace, has long relied.

Logan got her start working under Christine Amanpour (whom she suspects kept her down), was later shunted aside during the Iraq War by Dan Rather, and finally came into her own as a correspondent whose reputation, like Amanpour’s and Rather’s, preceded her. And, as was the case with Rather, that reputation may have worked too much as a substitute for confirmation: “Logan’s own credulity, it seems,” Hagan wrote, “was the central pillar of the report.”

That it is central to the 60 Minutes model has not escaped attention:

“The party line that Jeff is taking—‘She’s got to make amends for her transgression’—is to perpetuate the fiction that these pieces belong to the correspondents,” says Steven Reiner, a former 60 Minutes producer who once worked with Logan, “which 60 Minutes has to perpetuate. She’s got to take the hit. But he’s really saying, ‘We failed her; the system failed her.’ ”

[Correction: This article misidentified the CBS head as Jeff Fagan. Correct name is Jeff Fager. We’ve updated to reflect this.]