5QQ caught up with Jeff Brown while he was on assignment for PBS NewsHour in Haiti, producing a five-part series on how the country is doing a year after the massive earthquake. Brown’s been part of the NewsHour family for twenty years, as correspondent and a co-anchor of PBS’s nightly newscast–a program that he describes as a “niche” product serving a savvy and loyal audience. The Emmy Award winner writes NewsHour’s arts and culture blog and proving his uber-cool nature, agreed to answer our 5 Quick Questions late at night after a long day of earthquake coverage. 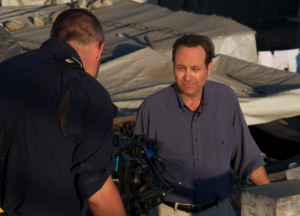 1. According to the Tyndall Report on 2010, the earthquake in Haiti was the second-most-covered story with 426 minutes of airtime. Was that enough?

I’m not sure how to calculate “enough” in terms of minutes. It was a major disaster, deserved a huge amount of attention, and seemed to get it from what I can tell (remember that I’m mostly focused on what we’re doing day to day and not able to monitor everyone else’s coverage). The more interesting question is whether Haiti will continue to receive “enough” attention. We — media and news consumers — have short attention spans. We’re there for the first anniversary now, but as a number of people have told us, this is a very long-term project. Will we go back next year? Five years from now?

2. In the overall landscape of news options available to Americans, where does NewsHour fit in?

Here’s how I think about it: In the old world of mass-market television news, where just a few networks dominated, the NewsHour was a ‘niche’ that offered something different and unique: A full hour, extended analysis, more viewpoints, etc. We had an important role to play and developed a very loyal audience who appreciated that. Today, the world of news media is ALL ‘niche’. The consumer has a zillion choices. Many are fairly narrowly focused — in political terms, for example, or on certain subject areas. Within this new world, the NewsHour is still a ‘niche’ — a good sized one — and arguably we have a more important role to play in offering the depth, breadth, and style we’ve always tried to provide and that is harder to find elsewhere.

3. If someone’s not a regular viewer of your newscast, why should they make a point of setting their DVR or tuning in to watch your five part series on Haiti–what do we need to know?

I can say we’re going to some amazing places, talking to all kinds of people, reporting on important things. We saw cholera and its victims up close. We went into small villages in Haiti’s countryside. We’ve tried to see what’s working and what isn’t a year later in Haiti’s rebuilding at the earthquake’s epicenter. And — a bonus — we’ve talked to writers and will offer voices not usually seen on television. But no doubt many reporters can say similiar things (except, perhaps, the last one). So the difference has to be in how the stories are told. For us, it’s about taking the time and providing the context to let the viewer come to know the people, the place, the issues, so he or she can gain a deeper understanding. And we strive to present it all through compelling and well-crafted storytelling. So, folks: Watch nightly and set the DVR when necessary.

4. You’re in Haiti now, surrounded by this story. Is there any moment in your day that allows you to break away from the magnitude of it all–anything where you can de-stress, smile or even laugh?

It’s a particularly painful place and story. But I’m with a good group of people and we find ways to take a breath and de-stress. There are many smiles, certainly, because the Haitians we meet are often so friendly and open. And we do laugh, yes, mostly at ourselves. Just one example: We were in a small village in Haiti’s central highlands. We’d shot our interviews and our cameraman was trying to get everyday scenes of life. You want people to act ‘naturally’, of course — whatever that means. Most of the time people understand and it works. But in this tiny place — I don’t know how often camera crews come through — one particular woman just kept staring at the camera. Our producer finally said to her: “It doesn’t work if you do that. Please act like we’re not here.” She responded: “How can I act like that? I’ve seen you! You’re here!” So direct, so honest, so irrefutable. We laugh at ourselves: Yes, indeed, ma’am, you got us there. We’re here!

5. Not to pigeonhole you or anything, but you seem to be a pretty serious correspondent, all PBS and like that. When you get home do you dive into politics, or spend an entire afternoon watching Top Chef? What can you tell us that will convince us you’re a mere mortal like the rest of us?

“Not to pigeonhole” me? Nice try, buster. Let’s see: I spend most of my free time at home with my family. And I’m good at relaxing. I read (mostly novels), listen to music (a wide range), jam on the piano with my rock-star (in the making) son when he’ll let me, play basketball several times a week (my chief exercise, but my knees hurt), passionately support all Boston sports teams (right now praying for Pats over the Jets). My wife and I go to the movies and watch TV (we’re big HBO and Showtime series viewers) and I like a glass of scotch for a nightcap. In other words, just a guy — “all PBS and like that.”