5 Seinfeld References That Made Their Way into Politics 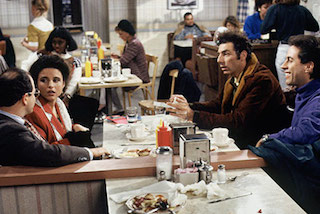 This Saturday, July 5, marks the 25th anniversary of Seinfeld’s 1989 debut on NBC, and the think pieces about the show’s legacy are piling up faster than you can say “Serenity now!” The show about nothing did more than just change television, it invaded every corner of our lives, including the political sphere.

Below are five times over the last couple of decades that Seinfeld references popped up in politics, in sometimes enlightening, but mostly just baffling ways.

The earliest known Seinfeld reference in Congress came in 1997, just one year before the show ended its nine-year run. As captured by BuzzFeed’s Andrew Kaczynski, Rep. Joel Hefley (R-CO) imagined an absurdist conversation between Jerry Seinfeld and George Constanza as analogous to a debate in the House over giving a tax cut “to those who don’t pay any taxes.”

Hefley went on to explain George’s “warped view of reality” to his fellow Congress members. He described a scenario in which an unemployed George is complaining to Jerry about not getting a tax cut, even though he pays zero taxes. “In other words, you pay no taxes, but you want a tax cut,” he imagined Jerry saying to George, to which George would reply, “Exactly!”

“And there you have it, liberal Democrats, meet Jerry Seinfeld,” he concluded.

As Jerry would no doubt say in response, “That’s a shame.”

For this next moment, fast-forward all the way to February 2012 and the Republican Primary Debate in Arizona. Mitt Romney was delivering his opening statement when the crowd burst into spontaneous applause midway through what he was trying to say. Instead of pushing through to the end, Romney interrupted himself, saying, “As George Constanza would say, when they’re applauding, stop.”

He didn’t quite get the reference right, but the sentiment was there. Romney was referring to the plot from the final season of the show in which George decides to leave his office meetings on a high note the way a Vegas comic exits the stage after getting a particularly big laugh.

If Romney really wanted to nail the reference, he would have thrown his hands up in the air, said, “All right! That’s it for me!” and walked off the stage.

3. Christie vs. Booker Are the New Jerry vs. Newman

The Jerry vs. Newman rivalry was one of the longest-running jokes on Seinfeld, from the way they snidely greeted each out in the hallway and on the sidewalk with drawn out “Hellos” to the way Jerry would say “Newman!” every time he realized he’d been bested by his mortal enemy.

So naturally, when Governor Chris Christie (R-NJ) and then Newark Mayor Cory Booker decided to collaborate on a viral video about their own rivalry in 2012, they decided to take a page from the Seinfeld playbook.

The video played on Christie’s anxiety of being overshadowed by Booker’s heroic feats, such as rescuing a woman from a fire. Christie repeatedly offers up his services to the state police, but they prefer to let Booker handle things. Each time, Christie does his best exasperated Jerry impression, sneering, “Booker!”

By the end of the video, the tables are turned as Mitt Romney is apparently trying to persuade Booker to become his vice presidential nominee over the phone. When Christie interrupts to take the call, Booker looks into the camera: “Christie!”

The Washington Post’s Marc Thiessen was likely the first to coin the term “Seinfeld shutdown” four days after the government came to a halt over the Republican Party’s objections to the Affordable Care Act in October 2013.

After laying out the convoluted negotiations that led to the shutdown, he wrote:

It calls to mind the episode of Seinfeld where Jerry and George are coming up with an idea for a show to pitch to NBC — and decide it will be “a show about nothing.” That’s what this standoff has become — the Seinfeld Shutdown, a shutdown about nothing.

The term made it all the way to Congress when a Democratic representative from Oregon named Peter DeFazio used it during a House hearing on the effects of the government shutdown, which had just entered its third week.

DeFazio began castigating the Republicans’ “vain attempt” to delay the implementation of Obamacare by effectively shutting down large sectors of the U.S. government before calling the whole thing a “Seinfeld shutdown, a shutdown about nothing.”

Watch video below, via C-SPAN3:

And finally, we arrive at Festivus. The holiday invented by George’s father Frank Constanza has gained an unexpected following over the years, with more Americans than you would believe erecting aluminum poles, airing grievances, and possibly even engaging in feats of strength.

Count among the Festivus followers Sen. Rand Paul (R-KY), who spent some time this past December airing his grievances on Twitter about everything from the Senate cafeteria food to America’s rising debt.

Dan O’Keefe, the Seinfeld writer who created Festivus, even weighed in on Paul’s embrace of the holiday during an appearance on CNN’s New Day. “When Rand Paul tries to seem relevant with 15-year-old pop cultural references, it reminds me of when Bob Hope used to dress up as the Fonz, but that’s just me,” he said.