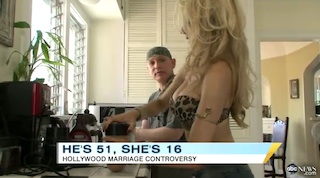 How about we send you off into the weekend with a bit of true love, a little something beautiful to warm your hearts? Well, we’re not sure we have that. What we do have is some video of Doug Hutchison and Courtney Stodden whose marriage last May led to a big Internet uproar (and a pretty great Anderson Cooper segment). The reason people were so upset; he’s 51 and she’s 16.

The newlyweds gave their first interview to Good Morning America and it’s everything you’d imagine and more.

This is one of those videos where I don’t want to ruin the surprise of you watching it yourself (also, to be honest, I couldn’t get through the whole thing), so here’s a quick rundown of the fun stuff I learned:

Anyway, I’ll leave the rest of the fun for you to discover. You can watch the video from ABC below: