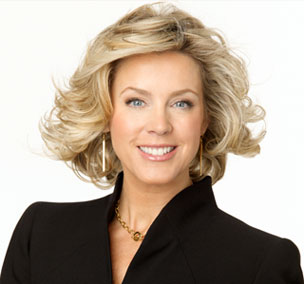 Deborah Norville‘s career in media has spanned from network to cable, morning to evening. She’s anchored evening newscasts at NBC and CBS, did a stint on both the Today show and The Early Show and hosted a show on MSNBC. But now she is the long-time anchor of the popular syndicated news show Inside Edition. She’s also the author of several books, from Children’s to Nonfiction – the latest being “The Power of Respect: Benefit from the Most Forgotten Element of Success,” which came out this week. With back-cover blurbs ranging from Sean Hannity to Dr. Mehmet Oz, the book highlights what can be gained by “respect” – both professionally and personally. Now she’s the latest to give her thoughts for the Mediaite 5QQ – Five Quick Questions.

First see CNBC then flip between Today and GMA.

Media isn’t following the money. Who’s watching to see where all that federal money is going?

@deborahnorville works 2 hard does 2 much is a good friend

Excited. News consumers have finally realized we need an informed public. Journalist are painfully aware of where they’ve fallen short as aggressive reporters.

Check out Norville on the Mediaite Power Grid.