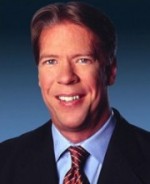 Major Garrett is Fox News’ Senior White House Correspondent and the occupant of Row 2, Seat 4 (both the seat and the blog). He is also the 3rd member of the Cartoon White House Press Corps (South Park icons FTW!) He’s a tough, tenacious questioner of the Obama White House, and while his exchanges with Press Secretary Robert Gibbs can get intense, he’s always a consummate professional. Not to mention a man of the people. In between Twittering the briefings, doing liveshots for Fox, honoring our troops and Sunday afternoon football, he found time to answer our 5QQ – Five Quick Questions.

First news comes from blackberry on e-mails I missed overnight, then to WaPo, NYT, WSJ and BBC.

Seriously, I think we miss this forever – currency, China and India.

47. Father. Husband. Journalist. Friend. Believer. Energetic, but flawed in all except age.

Always excited. I’ve always been about news, never sales. Good information will find a market. Newspapers aren’t dying because news is dead, newspapers are dying because classifieds are dead. Cost structures are changing as rapidly as revenue structures. Smart companies will adjust and find a way to thrive. Same with TV. After the excitement of new technology wears off, people will crave content instead of marveling at new delivery systems. Mark my words: content is still king.

Read more about Major Garrett’s career here, follow him on Twitter here, and check out his rank on the Power Grid here.