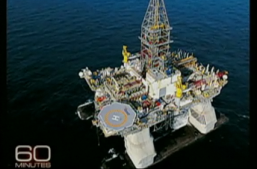 In case you missed this riveting 60 Minutes report last night on the BP Oil spill in the Gulf, it is worth your time. This, by the way, is the sort of investigative journalism that people worry about losing when they talk about plummeting ad sales, and deep budget cuts. Moreover, the BP Oil spill is just the sort of story that is going to require a long dedicated look; it’s already becoming quite clear that the roots of the problem are long and may lead to places people would rather not be uncovered, and that there are likely a lot of contributing factors here that the people in charge are (not surprisingly) not disclosing.

For the segment, Scott Pelley conducted a long interview with survivor Mike Williams who provided a graphic description of his escape and also told Pelley that the there had been plenty of warnings, for weeks beforehand, leading up to the explosion. Specifically, there was “trouble from the start” and four weeks before the actual explosion, due to delays that were themselves a direct result of trying to rush the process, a “vital piece of safety equipment was damaged.” Alas, what it mostly sounds like is another instance of profit taking precedence over responsible action.

Sadly, there’s a lot more, including the fact that on the day of the explosion some officials were flown in for a ceremony to celebrate the rig’s safety record. And that a BP Oil exec may have interfered with sealing the well. Also, that the ‘abandon ship’ order resulted in a panic and numerous crew members were left on board. Part one and two, below. Be prepared to be both riveted and infuriated.