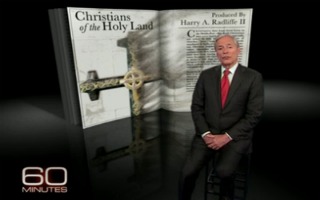 CBS’ 60 Minutes reporter Bob Simon profiled the plight of the rapidly disappearing Palestinian Christian community on Sunday and revealed that Israeli Ambassador to the United States, Michael Oren, attempted to pressure CBS News about the story while they were still conducting interviews. In an interview with Oren, Simon said he’s never received that reaction from a story that had not yet aired. Oren conceded that complaining to CBS was an “extraordinary move.”

“Palestinian Christians have been leaving in large numbers for years,” Simon began his report on Christians in the Holy Land. “The Christian population there is down to less than 2 percent, and the prospect of holy sites – like Jerusalem and Bethlehem – without local Christians is looming as a real possibility.”

Simon recalled that, while the part of the world known as “the Holy Land” was bitterly contested, “when we decided to do the story last year, we did not realize it would be so controversial.”

Simon spoke with an Old City patriarch of the Church of the Holy Sepulcher in Jerusalem. He told Simon that very few Christians still reside in the Old City. Simon says that local leaders worry that Jerusalem could soon become a “spiritual theme park” and a “museum” where only Christian tourists come to visit but do not reside.

Simon goes on to say that Palestinian Christians are being squeezed out of existence, unable to compete with a growing Muslim majority and the Israeli settlement communities in the West Bank. 60 Minutes profiles the West Bank wall which has reduced terrorism by 90 percent, but turned Bethlehem, which falls on the Palestinian side of the wall, an “open-air prison.” A term which has been used by many opponents of the Israeli occupation of the West Bank, from United Nations envoys to Turkish Prime Minister Tayyip Erdogan.

60 Minutes then profiles Michael Oren, Israel’s ambassador to the United States. “We have to protect our country, but sometimes you have to do what you have to do in order to survive,” says Oren. “I think that the major problem in the West Bank, as in elsewhere in the Middle East, is that the Christian communities are living under duress.”

“And that duress is coming from Muslims and not the Israeli occupation,” asks Simon. Oren agrees.

60 Minutes profiles several Palestinian’s who say that this excuse is merely a selling point to pitch to the Americans and is untrue. Simon identifies a Christian church which has advocated non-violent resistance to the Israeli occupation and has the support of 13 Christian denominations.

“These are denominations that are exceedingly critical of the state of Israel, sometimes to the point of going beyond the point of legitimate criticism,” says Oren. When asked to elaborate on that charge, Oren says they were accused of crimes historically identified with anti-Semitism and it was so beyond the pale that the Israeli government never officially responded.

Simon asks the Palestinians’ whether they believe that Israel’s actions which negatively impact Christians would turn off the state’s major benefactor, the United States? The Palestinian’s agreed – as did the Israelis, albeit covertly. Simon says that Ambassador Oren called CBS’ News Chief and 60 Minutes Executive Producer Jeff Fager while they were reporting the story and attempted to pressure them to not air the piece. Oren told Fager he believed the upcoming story was “a hatchet job.”

“It seemed to me outrageous – completely incomprehensible – that at a time when these communities, Christian communities throughout the Middle East are being oppressed and massacred – when churches are being burnt, when one of the great stories of history is unfolding – I think you’ve got me a little bit mystified,” said Oren.

When asked why he felt it was necessary to call the CBS news director on the matter, Oren said he does that “very infrequently as ambassador” and called it “an extraordinary move.”

The interview between Oren and Simon turned contentious when he accused 60 Minutes preemptively of airing a story which would portray the Israeli occupation of the West Bank in a poor light. “I’ve never gotten a reaction before from a story that hasn’t been broadcast yet,” Simon told Oren. Oren replied, “well, there’s a first time for everything, Bob.”