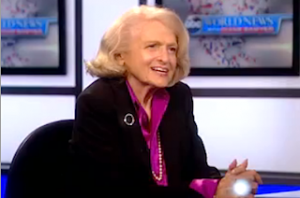 84-year-old Edie Windsor, who became the face of the fight against the Defense of Marriage Act, sat down with Diane Sawyer on ABC World News Wednesday evening to describe what it was like to hear the news that the Supreme Court had ruled DOMA unconstitutional.

Windsor was with her late partner Thea Spyer for 42 years and they were married in Canada in 2007. Two years later, Spyer died in New York where the two women lived and because of DOMA Windsor was hit with a huge federal estate tax that she would not have had to pay had she been married to a man.

When she heard that she had won the Supreme Court case, she told Sawyer the first thing she did was “cried.” She said, “the room was full of people–screaming and crying at the same time.” Like the plaintiffs in the Prop 8 case, Windsor also got a chance to speak to President Obama today. “I talked to the president this morning,” she said, “and he was absolutely charming and congratulated me and I thanked him for what he had done in speaking up.”

Windsor spoke directly to those who “remain opposed” to marriage equality after the rulings. “Maybe trust me, okay? I think it will only be better. My country is now giving dignity to this beautiful person that I lived with, okay? And so today my country gave dignity and appreciated who she was.”

Of her late wife, Windsor said, “I looked at her picture and I said ‘Honey it’s done!’ I know what she would say, she would say, ‘You did it honey!’”