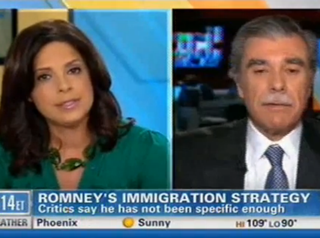 Romney campaign adviser Carlos Gutierrez visited CNN’s Starting Point to talk about immigration, but failed in a ten-minute segment to give a satisfactory answer to whether Mitt Romney has any specific immigration reform proposals at all. After being asked, in various forms, whether Romney supports Arizona’s SB-1070 bill as it stands after the Supreme Court gutted most of it yesterday, Gutierrez kept arguing that President Obama had not led on this issue, and that asking what Romney’s stance on the bill is was a “distraction.”

RELATED: Napolitano: ‘Almost Inconceivable’ That Obama Can Carry AZ ‘After What He’s Done To Their Sovereignty’

After asking several times whether Romney had a specific plan to deal with illegal immigration, Soledad O’Brien began asking Gutierrez specifically about the constitutional portion of SB-1070, as per the Supreme Court. “I’m not just sparring with you, sir, as you know, this is the critical, central, most controversial portion of this bill, and Governor Romney has not said if he supports it or not.” Gutierrez refused to answer, arguing that “this is not about Governor Romney” (“yes it is, if he wants to be president!” O’Brien retorted) and that the question was a “distraction.” “His position is that we have a mess and we need a national policy,” Gutierrez answered, later adding that Romney “supports states’ rights to act on this issue.” He added that “policy is not this one sliver of law,” a point on which O’Brien corrected him: “Yes, it is, it’s actually one sliver– three were shot down by the Supreme Court.”

“Romney and his people who speak for him are completely dodging the question,” O’Brien argued, asking once again and getting an answer she deemed “a great answer, but not to my question… that is not my question. My question is not that.” Asking again what Romney would like to do as President about the issue in specifics, Gutierrez answered that he wanted to “work in a bipartisan way,” and accused O’Brien of “trying to simplify something that is terribly complex.” They concluded agreeing to, someday, go through a 700-page immigration bill.