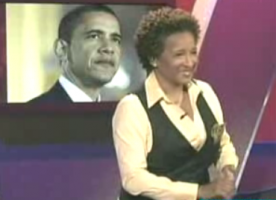 On Saturday night, Wanda Sykes‘ new talk show debuted on Fox at 11pmET. Sykes started off by laying out what the show would and wouldn’t be, and she took some delight in its context: “In honor of my first talk show, let me be the first person on Fox not to pick on President Obama.”

The show is appearing on Fox’s broadcast channel and not on Fox News, and so Sykes’ liberal stance is not quite as heretical as she’s making it sound. The Simpsons and Family Guy, no great bastions of conservatism, are Fox staples, and the rest of the programming lineup is beholden to no ideology other than the desire for good ratings.

Still, the episode was on-the-nose politically, and took direct shots at segments of what could be considered the Fox News constituency. From Sykes’ opening monologue: (transcript via Tabacco)

“Can someone explain something to me? Cause I passed out the other night — I mean, I went to sleep — when I woke up, people were mad at Obama! And I thought, ‘Did I miss something?’

Did Obama start two illegal wars? Did he fly over a flood zone and just wave? Did he torture detainees in a secret prison? Did he start illegally tapping phones? Did he alienate the world and squander a budget surplus? Because if he did any of that, we need to impeach that jackass!

He’s only been in office ten months, so what exactly has Obama done to piss everybody off? Nothing! People are going crazy calling him a Fascist. These people don’t even know what a Fascist is! When you say things like, ‘We’re gonna vote that Fascist out of office!’, you really sound dumb! When was the last time a Fascist got voted out of office! They usually stick around.”

The more standard skit and interview portions of the show weren’t as overtly political, but they bore the marks of a certain mid-2000s strain of outspoken humor: the clip below begins with a rather clunky bit about how Ann Coulter uses her huge eyelashes (?) to swat away criticism while making whooshing noises.

It’ll be interesting to see whether or not the show will have any chance of taking off: it has gotten largely negative critical reviews so far, and has the further misfortune of competing with the first half hour of SNL during its second half.

One thing is fairly clear: Christopher Hitchens, who wrote a recent Atlantic essay on the “fat-target problem” of liberal comedians, and singled Sykes out for “[breaking] bravely with tradition and chose to roast the absent Rush Limbaugh rather than the incumbent chief executive” at the White House Correspondents’ Dinner earlier this year, probably won’t be a fan.