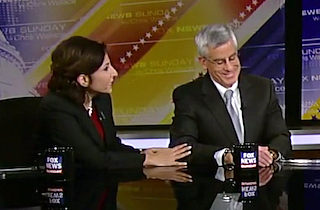 Neera Tanden, president of the Center for American Progress and one of the authors of the Affordable Care Act, took her fellow Fox News Sunday panelist and senior fellow at the Ethics & Public Policy Center James Capretta to task for criticizing the Affordable Care Act for kicking people off their health insurance plans when his own proposed plan would have a comparable effect.

“30 seconds to respond about a plan that doesn’t exist,” host Chris Wallace said to Capretta.

“She’s wrong,” Capretta said. “The plan I drafted, which I’d love to have Congress and other people consider, would not actually affect the vast majority of people in employer-based coverage because it won’t change the exclusion.”