A Review Of The Sunday Show Roundtables: This Week Runs Circles Around MTP 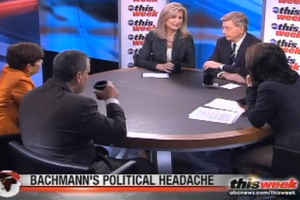 The roundtable discussion portion of the Sunday morning news shows is often the most entertaining and illuminating segment of the entire program. Given that the top-of-the show politician guest tries their hardest (and often succeeds) at sticking to their talking points and avoiding off-script comments, it’s often left to the roundtable participants to provide an element of unpredictability to the Sunday morning festivities. Of the three shows with weekly roundtable segments, in my opinion, week in and week out there is a clear hierarchy between the shows based on the variety of topics discussed, the diversity of guests and the overall enjoyment of hearing the conversation.

With CBS’ Face the Nation and CNN’s State of the Union not featuring a regular roundtable panel, that means only the three remaining Sunday shows can be judged and will be awarded medals accordingly. The bronze medal goes to NBC’s Meet the Press, the silver to Fox News Sunday and the gold to ABC’s This Week. The main thrust here is to compare the vast quality differential between the efforts of This Week and Meet the Press. Chris Wallace on Fox consistently presides over an informative and interesting discussion, but This Week narrowly edges it out for the gold with unique guests and a frequently more laid-back atmosphere that allows for a little more fun banter between the panelists.

“Fun” is one word however that would never come to mind of viewers of the Meet the Press roundtable. David Gregory regularly leads a discussion with the same NBC regulars like Andrea Mitchell, Chuck Todd, Eugene Robinson or esteemed newspaper columnists for an “intellectual” deliberation of the events in the week that was. There are subtle differences that often make Gregory’s roundtable sleep-inducing, including the apparently well-known rule that Gregory’s guests rarely engage one another, instead making their case directly to Gregory, and the probably intentional decision to avoid overly partisan guests in favor of centrists and reporters who can participate in more peaceful discussions. The problem however is then viewers are forced to hear frequent guest historian Doris Kearns Goodwin continually talk about how great a president Teddy Roosevelt was, or hear idealistic centrists (today former Senator Chuck Hagel, in the past usually Harold Ford Jr.) complain about how partisanship is ruining Washington and preventing anything from getting accomplished.

Several months ago I thought Christiane Amanpour was the wrong choice for This Week, primarily because she made the roundtable a more serious and boring segment than what it had been under her predecessor Jake Tapper. Today however, Amanpour has come a long way, and with her bookers, producers and This Week regular panelist George Will, deserves much credit as it seems she has not only metaphorically let her hair down to enjoy these segments more, but her show now often features more than just one roundtable per show amassing varied experts for different debates. Such a decision often results, as it did today, in exciting and buzz-worthy news (see here and here). Meanwhile the Meet the Press panelists long for the days of yesterday when the opposing political parties weren’t so mean to each other and possibly when Meet the Press was the show regularly making the headlines.