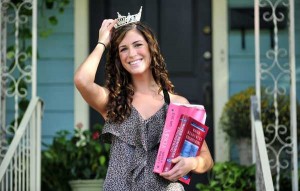 Last night’s episode of The Daily Show revisited the “Rally to Restore Sanity Bus,” a vessel ferrying six randomly chosen viewers to Jon Stewart‘s rally this Sunday. Just like the clip that aired on Monday, Tuesday’s segment focused on how reasonable the bus riders are, despite their differing political views—and despite correspondents Jason Jones and John Oliver trying to goad them into shouting at each other, since loud arguments mean good TV. (After all, says Jones, “Agree to disagree is not a television show!”)

But as a post on RedState.com indicates, the people riding the Daily Show bus don’t all perfectly adhere to the political categories to which they’ve been assigned. The poster points readers toward an article at the Macon Telegraph, which kicks off with this lede: “Sarah Dorminy isn’t really a conservative. She’s just playing one on TV.”

Dorminy, a Sanity Bus rider who’s been labeled the “Bible Belt Beauty Queen,” admits that she decided to “play up” how conservative she is in order to get a spot on the bus. “I’m fiscally conservative, but on social issues I’m more liberal. (On the bus), they wanted me to argue (like a conservative), but I’m pro-choice, pro-stem cell research, pro-gay marriage,” she tells reporter Phillip Ramati.

The article also gives a little more background on what else is fake about the Bus segments:

Dorminy, who is studying environmental engineering at Mercer, said she and the other bus riders were flown to Philadelphia, where they filmed the bus segments between there and Washington, along with correspondents Jason Jones and John Oliver. (In another gag, the bus leaves Cenac behind at a service station.)

Other gags included leaving the bus riders behind in Washington, several days before the event begins. In real life, Dorminy said they filmed over a 28-hour period before she flew home to Macon.

Dorminy, Buckner and Gerwig-Moore (who appeared briefly in Monday’s segment) will make the trek to Washington this weekend for the rally as part of a three-car caravan. The four of them will get to go to a special VIP section with the show’s correspondents, and Dorminy said there could be additional filming while there.

Does Dorminy’s admission hurt The Daily Show‘s credibility? Folks at the series itself would say no. In cases like this, Jon Stewart’s program always falls back on the excuse that it’s a fake news show—which gives it license to exaggerate for comic effect.

But when The Daily Show goes from making fun of real news to making news itself, that excuse doesn’t really hold up anymore.

It’s definitely disheartening to hear that the show’s chosen conservative is embellishing her political views. Even so, we don’t agree with the RedState poster’s assessment: “The Daily Show has cast as a conservative a girl who supports killing children and gay ‘marriage’, which, you know, definitionally makes her not a conservative.”

Polarization is the real problem with our political climate. There should be a recognized political spectrum that allows Americans to choose where they stand on a variety of issues, rather than a dichotomy that decrees all liberals or conservatives must agree with one another about everything. Why can’t someone be a pro-life Democrat, or a Republican who supports President Obama‘s health care plan?

The problem with the Sanity Bus segments, then, isn’t that Dorminy is pretending to be more conservative than she really is. It’s that The Daily Show appears to be presenting her in a preconceived political box—meaning that like the rest of the media, it’s acting as if every American must fit into one of two categories, die-hard liberal or die-hard conservative. We’d expect better from a show that supposedly lionizes sanity.