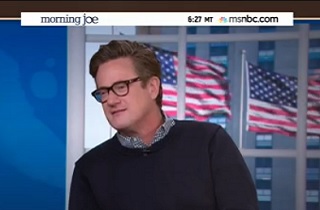 The rolling out of legalized recreational marijuana in Colorado has sparked endless cable news filler (and probably a befuddling uptick in traffic to The Blaze), including the occasional revelatory moment. For example, on Friday morning’s Morning Joe, host Joe Scarborough made the shocking revelation that he’s never tried the stuff, because it “makes you dumb,” then predictably defended his recreational substance of choice on the basis that weekend binge-drinking never leaves you an incapacitated moron come Monday morning.

After some banter about regional price differences, which Mark Halperin explained has to do with “quality, I’m told” (ha, ha, get it?), Scarborough offered that he doesn’t “get the legalization thing. I don’t want to get too deep into it, but seriously. It makes you dumb. Pot just makes you dumb.”

Scarborough explained that he used to hang around with people who smoked a lot of weed, then, in his best Chick Publications Bible tract character voice, said “Never once did I say ‘Hey, man. That looks like something I want to do.'”

Willie Geist then enacted the next scene in this familiar conversation with your dad in the 70s, asking “Does drinking make you dumb?”

“In large amounts, yeah, it makes you dumb,” Scarborough allowed, but observed that he never saw any of his weekend-drinking high school buddies hurting come Monday morning, unless they “wrapped their tree around a car.”

To end this classic improv drama sketch, Jim Cramer portrayed the role of Elvis Presley-esque overly-enthusiastic narc, telling the panel how he’s rroted out countless drug addicts from his payroll.

In a few years, this scene will play out just as familiarly, but with the old dude arguing to the whippersnappers that a little taste of smack after work is nothing like the really dangerous Synthemesc these kids are doing.

Whhops! Sorry, man, guess I hit the marijuana pipe a little too hard this morning. Here’s the actual clip: