A Sunday Show Actually Did a Segment on Climate Change, and It Stunk
VIDEO

A Sunday Show Actually Did a Segment on Climate Change, and It Stunk 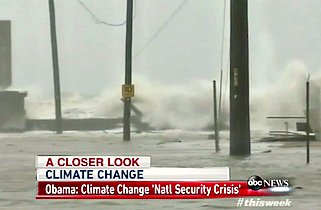 Sunday political show coverage of climate change has been so bad — devoting a sum total of twenty-seven minutes in 2013, a four-year high — that seventeen senators actually formed a task force to improving it. Normally the issue is raised only in passing, as when Senator Marco Rubio (R-FL) was asked about it during a twenty questions-style interview, and only gets discussed if somebody says something bizarre about it, as when Rubio freestyled an answer about “the notions” scientists advanced on the subject.

But Sunday morning This Week with George Stephanopoulos shoehorned a segment in at the very end of its hour, in a bloc with the channel-changing title “A Closer Look,” about the Obama administration’s proposed tightening of EPA regulations of carbon emissions.

This is not to say ABC News’ segment was especially quality coverage. We get, for instance, a Chamber of Commerce spokesperson saying, “The climate has been changing forever and will continue to change. And we do know humans are contributing to CO2 emissions. The question in front of everybody is, what do we about it? How do we do it? And at what cost?” Informative!

ABC also let the Chamber of Commerce’s stats about EPA regulations’ economic impacts go by uncontested; allowed only one line — less than ten seconds of real time — of Obama’s rebuttal; and didn’t interview a single economist, climate change expert, or environmental group. All in all the reportorial portion of the segment lasted just over two minutes, and focused almost entirely on the costs to industry rather than dangers to people’s health or the environment.

The second half was slightly better. Francis Beinecke of the National Resource Defense Council got about a minute to present the entirety of the case for the regulations, which ranged from environmental to health to economic benefits; but equal time was given to Hal Quinn, CEO of the National Mining Association, who performed an energy-bill version of the Tragedy of the Commons. Host George Stephanopoulos accepted the Chamber of Commerce’s economic estimates at face value, and predicated the entire segment on the coal industry’s theory that environmental regulations were punishingly expensive, but might be “worth the cost” due to environmental and health consequences he didn’t particularly bother to define (Beinecke did).

Beinecke managed to squeak in at the end the possible economic costs due to climate change and the economic benefits from clean energy, both salient points that deserved more of an airing in a segment so focused on a zero-sum framing of the issue between industry and environment.

But then came the line nobody concerned with an issue ever wants to hear on television: “I’m afraid that’s all we have time for.” The entire segment was five minutes, meaning it could represent a good chunk of the coverage climate change gets this year.