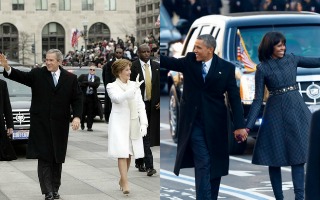 From substance to style, most are aware that the nation’s political press has imposed wildly divergent standards on themselves in their coverage of the administration of President Barack Obama and that of his predecessor, President George W. Bush. This lamentable condition has been well documented, so it may seem unsurprising that the press would cover Obama’s second inaugural far differently than they did Bush’s. But one’s ability to experience surprise is regularly challenged by the political press and their staggering disregard for consistency. A glance at how the media covered yesterday’s festivities and those of eight years ago might reinvigorate even the most jaded media watcher’s capacity for wonderment.

In January of 2005, media outlets were aghast over the pomp and tone of Bush’s second inauguration festivities — before they had even occurred. “Some critics say spending so much on these parties seems ill-timed both because of the Iraq war and the tsunami catastrophe in Asia,” wrote New York Times reporter John Tierney on January 16, 2005. He examined a history of muted 20th century inaugural celebrations that seek to acknowledge political or national crises amid which they occur by striking a staid tone.

“To some extent, the criticism of inaugural extravagance reflects the longstanding concern about turning the president into royalty,” Tierney wrote. This seems a quaint concern in the Obama era.

The narrative that Bush’s inaugural parade and parties were to be garish and tone-deaf having been established, the press went to work making this self-fulfilling prophesy manifest.

“Some Now Question Cost of Inauguration,” wrote the Associated Press’ Will Lester in 2005. He observed that the $140 million cost ($40 million of which was covered by private donations) of the ceremonies could purchase “200 armored Humvees with the best armor for troops in Iraq” or “vaccinations and preventive health care for 22 million children in regions devastated by the tsunami.”

ABC’s anchor of World News Tonight, Terry Moran, followed suit. “In a time of war and natural disaster, is it time for a lavish celebration?” Moran asked. “The total cost associated with all the parties and ceremonies are expected to exceed $140 million. And some people are asking whether it’s the right time for a celebration like this.” ABC reporter Geoff Morrell proceeded to interview anti-war activist Cindy Sheehan who agreed that “It’s exactly the wrong time to be celebrating.” Presidential historian Michael Beschloss provided context and precedent, observing that President Franklin D. Roosevelt chose to scale down the wartime inauguration ceremonies in 1944.

Could all of these observations have been made today? When America faces a persistent economic crisis with near-systemic unemployment above 7 percent and a debt crisis cripples the nation’s politics – not to mention the tens of thousands of American soldiers who are presently serving in combat zones in Asia and North Africa? Of course they could have. When the costs of Obama’s second inaugural was raised by CBS reporter Sharyl Attkisson, the focus was on the access granted to private donors who contribute to the event and not the appropriateness of the event itself.

Even though the president did not even acknowledge the economic crisis or the nation’s debilitating unemployment – the preeminent concern of most Americans — in his inaugural address, the nation’s media focused almost exclusively on Obama’s vocal defense of progressivism and personal identity politics.

“Party time,” the NBC News headline exclaimed, “Obamas attend inaugural balls.” “Obama honors military, dances at inaugural balls,” CBS News echoed. While these festivities most assuredly carried a price tag similar to Bush’s 2005 celebration, the notion that this celebration at a time of such hardship for so many Americans could be inappropriate did not merit any attention.

But the press also revealed their biases on substance as well as style — at least, those so unmoved by the pomp of it all that they could focus on substance. For this critique, we turn to New York Times conservative columnist David Brooks.

In 2005, with the war in Iraq raging and the global war on terror barely out of its infancy, Bush’s inaugural address focused extensively on the threat of militant Islam and the West’s role in combatting this ideological force. Bush’s speech detailed an extensive defense of the principle of shared security and the notion that spreading freedom abroad was, ultimately, the most effective way to secure the homeland.

“If one had to quarrel with the speech, one would say it overemphasized freedom,” Brooks said of Bush’s second inaugural address in 2005. “In a place like Iraq, the problem is order and authority. And you have to reassert order and authority and balance it with freedom.”

Brooks was friendlier to Bush’s speech in his column in the Times on January 22, 2005. He chronicled the griping among Washingtonians about the “gross materialism” of the inauguration pageant and the derision of Bush’s “vagueness” and “supposed detachment from the concrete realities” in his speech. But Brooks also found the speech to be a sound defense of the American policy of fostering the conditions abroad where freedom can spread.

Contrast this with Brooks’ reaction to Obama’s second inaugural address, “which surely has to rank among the best of the past half-century, makes an argument for a pragmatic and patriotic progressivism.” While he cautioned the president that the mood of the country is not necessarily amenable to a reshaping of the American social contract in the mold of progressive, utopian ideals, Brooks felt that Obama “came across as a prudent, nonpopulist progressive.”

“America will remain the anchor of strong alliances in every corner of the globe,” Obama said in his second inaugural address. “And we will renew those institutions that extend our capacity to manage crisis abroad, for no one has a greater stake in a peaceful world than its most powerful nation. We will support democracy from Asia to Africa, from the Americas to the Middle East, because our interests and our conscience compel us to act on behalf of those who long for freedom.”

Those very words could have been uttered by America’s 43rd president just eight years ago – had they been, they would have inspired garment rending among the nation’s handwringers the likes of which has been unseen for at least a decade. Though it was just one paragraph in Obama’s address, it spells out a foreign policy doctrine that would impose far less self-restraint on America’s interventionism than Bush. His 2005 address advanced only a policy of “encouraging,” not imposing, freedom in the globe’s darkest corners. One would presume that Brooks would find Obama’s embrace of a more muscular Bush doctrine problematic.

Observing “media bias” where it exists has become a clichéd and hackneyed enterprise. Bias is now almost an expected feature of America’s journalistic landscape. But this condition’s familiarity does not mean that it should go unmentioned – particularly when it is on glaringly obvious display as it was on Monday.

The obsequiousness and servility with which so many in the media approach the coverage of this administration is and remains a mark of shame. It is a noble mission to enforce honesty and accountability from America’s elected and unelected opinion leaders. In fact, it is a mission the political press once shared.