Cable News Conundrum: What If the Missing Plane Is Never Found?

Cable News Conundrum: What If the Missing Plane Is Never Found? 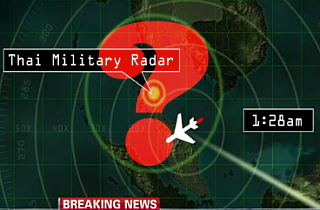 Almost every big news story—the kind with legs that can stretch over several days–has three things in common:

Last April’s terror attack in Boston are a classic example: The beginning was the bombing itself that killed three people–including an eight-year-old boy and injuring 264. From a news perspective, this was arguably the biggest breaking domestic event to hit the U.S. since 9/11.

The story quickly swelled from there, with knee-jerk reactions and erroneous reports filling the airwaves for the next 96 hours. And once you thought those who carried out the attack were long gone, the Tsarnaev brothers emerged upon killing an MIT police officer and hijacking a car outside Boston. Several wild chases happened from there. One of the brothers killed early Friday morning (four days later), the second eventually found wounded in a boat almost nine hours later after the city was basically shut down.

Beginning. Huge arc. Ending. The trial of Dzhokhar Tsarnaev is the only detail left in the story. It’s outcome all but certain. Whether it’s the death penalty or a lifetime jail sentence, we won’t be hearing from him anymore.

But the missing 777 we’ve been hearing about almost 100 percent of the time on CNN—which has resulted in doubling the network’s ratings—and a good chunk of the time on Fox and MSNBC…has no such story arc. It has a beginning, of course (plane with 239 passengers out of Malaysia goes missing on March 8th), but as far as story arc and ending, it has been lacking in the former and obviously non-existent for the latter.

One could argue the arc being the plane steering off course or the transponders being shut down. But the 5Ws and 1H (who, what, when, where, why and how) all don’t apply with the loose exception of “when” in terms of when the plane went off to the west: How it happened? (Pilot-initiated? Fire on board? Hijacking?) Why it happened? (No motive has been found thus far, no terror group has taken responsibility, no definitive evidence of mechanical failure or pilot error). Where the plane went or where it is? What happened in general? Did the plane go north, south? Is it in the ocean or somehow on land? It’s all a complete mystery despite nearly 270 hours of speculation from seemingly every living aviation expert with access to a camera.

Whatever remains in terms of an arc for the missing plane are not built on facts, but mostly guesswork. Audiences don’t seem to mind, as the conversations across dinner tables and at water coolers basically mirror what they’re hearing on TV. It’s a cable executive’s dream: An easy story for an audience to relate to with no shortage of theories to speculate on.

Which brings us to how this all ends. With each passing day, the chances of finding a plane even as large as this one becomes increasing remote given the size of the search area (seven million square miles), cost (smaller countries in the area can’t afford to continue searching for much longer), and the fact that plane parts can’t float forever (if it did crash in the ocean). In 2009, an Air France plane crashed in the Atlantic Ocean between Rio and Paris during difficult weather conditions. It took nearly two years before a majority of the wreckage and bodies were recovered, while the data and voice recorders weren’t located on the ocean floor until 2011. It could be years until we know what happened, if ever.

From a media perspective, it will be fascinating to watch the cable networks–and particularly CNN–attempt to pivot out of 24/7 coverage despite lacking anything resembling closure. The easiest way out would be for another big story to emerge quickly (Russia invades Eastern Ukraine, for example) to allow a more seamless segue out. But if things remain relatively slow, the break up–like most when one side doesn’t necessarily want the relationship to end–will be awkward.

Almost all big stories have a conclusion, making coverage nice and neat from a producing/reporting perspective.

But the missing 777 is a different animal.

Until then—and we’ll call it at least a week before the legs on this one are exhausted—be prepared for more flight simulators, more analysis, more theories, more assumptions.

To do anything else would be bad for business.