Giuliani: “No Domestic Attacks Under Bush, One Under Obama”
video

Giuliani: “No Domestic Attacks Under Bush, One Under Obama” 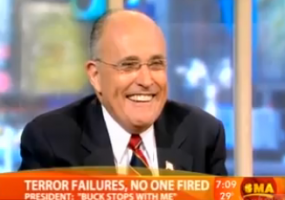 Rudy Giuliani, who once threw a fundraiser where he asked for donations of $9.11, has suddenly forgotten all about the worst terrorist attack on American soil in history. He told GMA host George Stephanopoulos that there were no domestic attacks under George W. Bush, while there has been one under President Obama.

Perhaps worse than that, Stephanopoulos seems to have forgotten about 9/11, the anthrax attacks, and the “Shoe bomber,” too.

When former Bush Press Secretary Dana Perino made a similar gaffe on Fox News’ Sean Hannity program, the whopper also went uncorrected, but as Fox Senior Vice President Michael Clemente has made clear, Hannity isn’t a news show. Stephanopoulos’ failure to follow up here (or to mention it on his blog) is inexcusable, especially given the heat generated by Perino’s slip-up just 6 or 7 weeks ago.

There are already people on Twitter attempting to cover Rudy’s patootie on this, but Jake Tapper has all the bases covered, including the notion that Rudy meant “domestic terrorism”:

The FBI’s definition of “domestic attack” is: “Americans attacking Americans based on U.S.-based extremist ideology,” so that would not include ANY al Qaeda related attack, including accused Fort Hood shooter Major Nidal Hassan.

(I) assumed that’s NOT what Giuliani meant, since that definition is really a reference to the likes of the Unabomber…

If by “domestic attacks” Giuliani meant “attacks on the homeland,” thats wrong, if he meant but forgot to add post-9/11, also wrong…

Of course, there would be no need to guess at what Rudy meant if George had followed up.

As for Tapper’s Twitter sparring partners, I find it wholly disgusting that they’re treating this as an opportunity to mark up their scorecards, as though the lives of those Americans lost in these attacks are mere balls and strikes in a Red vs. Blue All-Star baseball game. That was, I suppose, Giuliani’s (and Perino’s) entire point, though.