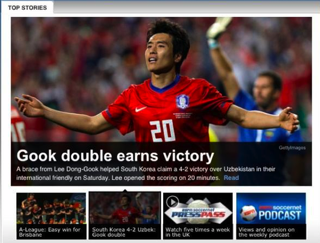 Lee Dong-Gook is a soccer player on South Korea’s national team, who made headlines over the weekend by making the winning goal for his team against Uzbekistan in a friendly tournament. His first name is Dong-Gook– like Mary-Ann or Jean-Michel– and his last name is Lee. Typically, media outlets use a players last name in headlines, as a matter of style. So what is going on in this ESPN Soccernet headline, exactly?: “Gook Double Earns Victory.”

The headline reads “Lee Earns Double Victory” now, but wasn’t fixed before someone took a screen-grab and spread it over the internet. The most bizarre thing about the headline is not that someone didn’t notice they were putting an offensive name for an Asian person on ESPN.com yet again, but that, whether they believed Lee’s name was written in Western-style order or not, “-Gook” is the last part of the name that appears given– if you had to guess, “Dong” seems like a safer bet, no?

On the one hand, it is somewhat entertaining to watch the media try to cope with newsmakers who are neither white nor black, as if there are some sort of decency standards out there for how to deal with people who are Latino or Asian or Middle Eastern or Pacific Islanders but no one with access to a website has figured them out yet. On the other hand, it is a tad frustrating, to say the least. Is it really this hard to avoid using ethnic slurs? Are all of America’s headline writers contestants on Celebrity Jeopardy?