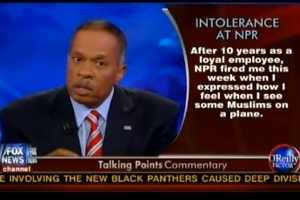 Before the Juan Williams case, the media had a standard mode of handling newly radioactive cable news personalities: a public apology, a few weeks of silence, and some high-profile interviews with more reputable cable news personalities. Juan Williams is unique not only in that his firing appears to many as particularly egregious compared to that of, say, Rick Sanchez, but Williams’ path to redemption appears to be an all-out war with his former employer.

It’s fair to say that Williams had never been angrier on the airwaves than he was last night while guest-hosting The O’Reilly Factor. Sure, it doesn’t help that the network on which he initially got himself in trouble, Fox News, upped the ante on his salary and gave him a show to host on the most coveted real estate in cable news, but aside from Fox’s work, Williams is really embracing the martyr role.

His “Talking Points” segment threw the kitchen sink at NPR: regret at ever associating with liberals, specific swipes against former coworkers Nina Totenberg and “a comedian,” even the race card for good measure. There was something newly Beckian about this Williams– whose fanbase grew out of being one of the more moderate voices on the network– though whether those overtones will last after the whole affair boils over (or, cynics will argue, after Election Day) is still to be seen. Williams even threw in a dash of Keith Olbermann in there, earnestly inquiring of his former boss, NPR CEO Vivian Schiller, “Have you no shame? You and your far-left mob fired me!”

“I used to think the left wing was the home of tolerance, open-mindedness, respect for all viewpoints,” the newly reformed Williams told his audience. “But now, I learned the truth the hard way.”

It’s hard to blame Williams if he comes off as somewhat melodramatic or shoutier than usual– after all, the man was just fired, and the media more or less agree that the firing was not over a serious offense. Schiller’s comments that Williams should keep his opinions “between him and his psychiatrist,” were just the icing on the cake. But beyond the central argument of the validity of either side’s opinions, it’s fascinating to watch the nearly overnight evolution of a fairly quiet, moderate commentator into a flame-breathing (many would say rightfully so) Fox News host. Even when he had hosted the Factor previously Williams had never exhibited this much outrage.

There’s also an air of history in what Williams has done. Surely this must be the first time that a recently-fired political commentator gets to host a segment on a primetime show two days later, chatting with a guest about how terrible his former employer is. Getting to attack your former employer on the most-watched program in cable news sounds like a revenge fantasy straight out of Office Space— a thoroughly satisfying Steven Slater moment of justice in the otherwise cookie-cutter world of media firings.