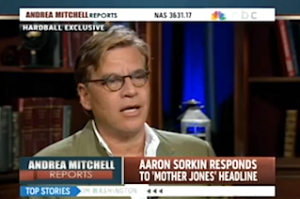 Aaron Sorkin does not think The Huffington Post “sucks.” But if you caught an early version of a piece on Mother Jones’ website today, you may have gotten that impression. The Newsroom showrunner spoke to MSNBC’s Chris Matthews this afternoon in an attempt to clear up the headline writer’s “lies.”

Sorkin’s actual comments about The Huffington Post, where he himself he been known to blog, came during preview showing and panel discussion in Washington, D.C. last night, co-hosted by HBO and The New Republic. According to Mother Jones’ Asawin Suebsaeng, Sorkin called the website “a genuinely damaging force in our culture,” criticizing it for “laughing at somebody else fail” and putting “an exclamation point after everything” instead of “just reporting on things that we need.” His sentiments can be reflected in the way his fictional cable news team strives to produce a higher brand of journalism.

Mother Jones’ headline, as it read before it was changed.

Mother Jones has since updated its headline to more generic-sounding, “Aaron Sorkin on ‘The Newsroom,’ Huffington Post, and Journalism Screw-Ups” with an editor’s note at the bottom that reads, “The headline on this story has been changed to more clearly reflect Sorkin’s comments about the press.”