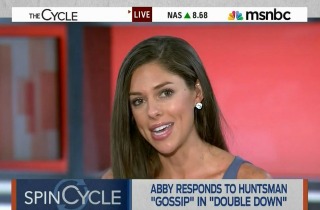 In the follow up to the acclaimed 2008 campaign postmortem Game Change, reporters Mark Halperin and John Heilemann reprise their roles as chief chroniclers of the 2012 presidential elections in the book Double Down. One of the revelations in that book is that Jon Huntsman Sr., father to former Utah Gov. Jon Huntsman Jr., was the source of the information which led Sen. Harry Reid (D-NV) to claim Mitt Romney paid no taxes. MSNBC host Abby Huntsman took issue with this claim on Monday saying that many of the reports in the book are misleading and are as thinly supported as “high school gossip.”

“This book says more about the Washington consulting class than really anything else,” Huntsman’s rebuke of Heilemann and Halperin began. “It’s filled with leaks about other leaks and reminds me more of high school gossip than actual, serious investigative reporting.”

RELATED: Obama Campaign Manager: We Were More Concerned About Huntsman As GOP Nominee Than Romney

Turning to the rumors about her grandfather, Huntsman said there was “very little even worth responding to.”

“Very little based in reality,” she continued. “Most based in conjecture, perception, and self-promotion.”

“All they could do was find an unnamed third-party source to claim it was my grandfather who was responsible,” Huntsman said. “That’s the bar they set for the level and quality of reporting.”

“Mitt Romney’s taxes, let alone who leaked them, will never solve our nation’s greatest problems,” Huntsman asserted. “As someone who’s actually in a position to know what really went on, I know some of this isn’t actually true.”