ABC’s Elizabeth Vargas Opens Up About Her Struggle with Alcoholism 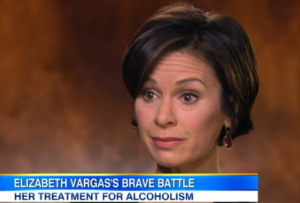 ABC anchor Elizabeth Vargas is speaking out now about her struggles with alcoholism and the time she spent in rehab. In a candid interview with George Stephanopoulos, Vargas admitted, “I am an alcoholic. It took me a long time to admit that to myself.”

She said she spent a lot of time and energy keeping it a secret from people, and Stephanopoulos, who’s worked closely with Vargas at ABC for years, admitted that he never would have guessed. Vargas has done a number of 20/20 specials on drinking in the past, but as for her own issues, Vargas did lots of rationalizing and denied she had a problem.

She told Stephanopoulos how she went to rehab but almost left too early for the treatment to work properly.

“I went to a rehab that specializes in treating trauma… I stayed for 28 days and left against their advice and came home because I really wanted to come home and they said ‘We think you need to do more work,’ and I came home for five days and realized they were right, and I went back.”

She concluded, “It’s always embarrassing to have the entire world know your deepest, darkest secret, and yet, I think in the long term it will be ultimately a blessing because I can be free about it.”