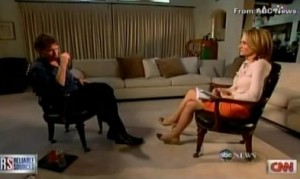 On CNN’s Reliable Sources Sunday, host Howard Kurtz interviewed ABC News’ Andrea Canning, whose 20/20 interview of troubled actor Charlie Sheen kicked off a week of phosphorous-hot Sheensploitation™. While Kurtz did touch on the exploitative nature of the media’s Sheen coverage, Canning defended her interview, and revealed an interesting component of the interview equation, an almost Stockholm Syndrome-like identification with the subject that made Sheen’s behavior seem almost normal to Canning.

Given the fact that Canning’s was the first interview in the coming Sheen-a-lanche, there is a case to be made that she’s less guilty of feeding into Sheen-mania (as well as Sheen’s own mania), it was her explanation of how she felt about the interview that sets Canning apart from the news executives who offered rote excuses for their exploitation of Sheen. Despite calls to cancel the segment, Canning says that when the interview was over, she thought, “That went well,” and admitted to Kurtz that she was “in a fog” during the interview.

I can identify with some of what Canning is saying. In order to conduct a truly illuminating interview, it is necessary to empathize with your subject, in order to construct questions that will elicit more complete, honest responses. That empathy must, of course, be balanced with the considerations of the audience, and of the responsible practice of journalism. It is understandable that, in the moment, Canning might lose some perspective, especially given the charm and charisma of her subject. Troubled artists are often persuasive in their charisma, never more so than when they’re trying to rationalize those troubles away, and it works on some of us because we want to believe them.

But at some point, someone (if not Canning, then a producer, or a news editor) needed to recognize that the interview had morphed from a discussion with a newsmaker, into a news event itself, and handled it more responsibly. There are strong indications that Sheen suffers from some form of mental illness (for which he frequently self-medicates), which, while newsworthy, doesn’t justify putting that illness on display for several hours, and possibly making it worse.

If Sheen suffered from Tourrette Syndrome, how much footage of him saying “F*** douche nippleclamp!” would be necessary in order to get that message across? At a certain point, you’re just laughing at the guy’s illness, and applying the kind of stress that can actually aggravate it. Since we don’t actually know Sheen’s diagnosis, the media’s treatment of Sheen might be seen, by some, as defensible, but it can hardly be called responsible journalism.

In fact, Canning brings up another interesting point when she relates an off-camera exchange in which Sheen almost ends the interview. That sort of negotiation is commonplace in journalism, and each journalist must weigh the news value being offered, versus the restrictions being imposed. I wasn’t there, so I don’t know how deftly Canning tried to handle it, but Sheen’s offense could have been turned into an asset by saying, “If you think I’ve disrespected your girlfriends, why not let me give you a chance to defend them?”

In the same way, Canning, or one of the many people who interviewed Sheen after her, could have leveraged Sheen’s desire to be seen and heard, and asked that he allow his doctor to be interviewed. This would arguably have given Sheen a way out of the “Catch 22” that he’s simply in denial about his own illness, and a way for news organizations to cover Sheen more responsibly.

The problem with that scenario is that, if Canning had refused to air Sheen’s interview without some kind of medical input, ten others would have jumped at the chance, given the huge numbers (and dollars) at stake. It’s just another example of how the profit motive disproportionately corrupts journalism. Only time will tell what it ends up costing Charlie Sheen.