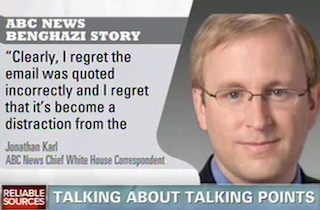 ABC News’ Jonathan Karl made news recently with a report about edits made to the Benghazi talking points — aspects of which have since been scrutinized. Following a report by CNN’s Jake Tapper and the White House’s release of emails about the matter, Karl issued a statement saying he regretted the inaccuracy.

Specifically, Karl’s report cited an email from national security adviser Ben Rhodes about the State Department’s specific concerns about the talking points. Tapper later followed up on that report — and after obtaining the email in question, he said Rhodes didn’t mention the State Department. Karl later said his report was based on paraphrased emails from a source.

Karl issued the following statement, which CNN’s Howard Kurtz read on air at the beginning of Reliable Sources:

“I regret that one email was quoted incorrectly and I regret that it’s become a distraction from the story, which still entirely stands. I should have been clearer about the attribution. We updated our story immediately when new information became available.”

In the online version of Karl’s initial report, he quoted Rhodes as saying, in an email:

“We must make sure that the talking points reflect all agency equities, including those of the State Department, and we don’t want to undermine the FBI investigation. We thus will work through the talking points tomorrow morning at the Deputies Committee meeting.”

The email released by the White House reads:

“We need to resolve this in a way that respects all of the relevant equities, particularly the investigation.

There is a ton of wrong information getting out into the public domain from Congress and people who are not particularly informed. Insofar as we have firmed up assessments that don’t compromise intel or the investigation, we need to have the capability to correct the record, as there are significant policy and messaging ramifications that would flow from a hardened mis-impression”

Last week, CBS News’ Major Garrett also reported on the story surrounding the talking points, adding that “Republicans leaked what they said was a quote from Rhodes.”

The CNN clip below: