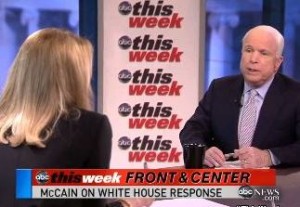 The reemergence of Benghazi as a political issue this week has caused conservatives to re-litigate the devastating debate moment in which Mitt Romney* claimed President Obama did not call the attacks an “act of terror” until two weeks after the fact. They got an assist from ABC News’ Martha Raddatz Sunday morning when, in an interview with Sen. John McCain (R-AZ), she “corrected” that assertion by saying “I think the White House would probably say there was the remark that it was a terror attack, though it did seem rather indirect.”

Raddatz, herself a 2012 debate moderator, began by asking McCain, “What do you make of the White House response” to ABC News’ report on the Benghazi talking points that were used by Amb. Susan Rice the weekend after the attacks.

“Can I just pick up on what you just showed Mr. Carney say?” McCain responded. “The President didn’t call it an ‘act of terror.’ In fact, two weeks later, before the U.N., he was talking about hateful videos and spontaneous demonstrations.”

Instead of simply correcting McCain, Raddatz posed the reality of what the President said as merely the opinion of the White House, and tried to bolster McCain’s point. “I think the White House would probably say there was the remark that it was a terror attack,” she said, as if every other person with ears to hear wouldn’t also say that, then added “though it did seem rather indirect.”

Lost in the post-debate kerfuffle over Romney’s disastrous use of this false talking point was the fact that Candy Crowley also tried to help Republicans salvage some dignity in the face of their humiliation at the hands of reality. Journalists should not be doing this, so for Raddatz, Crowley, and any other journalist who is tempted to go with the Republican flow on this point, here are the facts.

President Obama did call Benghazi an “act of terror” the day after the attacks, and it wasn’t indirect. If anything, the President was casting Benghazi in the most serious light possible, placing them in context with the Sept. 11, 2001 attacks, and called the victims of the Benghazi attacks “four more Americans who represent the very best of the United States of America.”

He was clearly talking about Benghazi when he said “No acts of terror will ever shake the resolve of this great nation,” but if that quote is too “indirect” for Raddatz, then she must have missed this passage from the President’s remarks the same day, in Las Vegas:

As for the ones we lost last night: I want to assure you, we will bring their killers to justice. (Applause.) And we want to send a message all around the world — anybody who would do us harm: No act of terror will dim the light of the values that we proudly shine on the rest of the world, and no act of violence will shake the resolve of the United States of America.

Or this, from a Sept. 13 speech in Golden, Colorado: (transcript via The White House)

So what I want all of you to know is that we are going to bring those who killed our fellow Americans to justice. I want people around the world to hear me: To all those who would do us harm, no act of terror will go unpunished.

Sen. McCain has a vested political interest in pretending that calling something an “act of terror” is mutually exclusive to the idea that the attacks might have been a reaction to other protests in the region, but the record, for journalists, is clear. Even if you view them as contradictory, the President clearly did call the attacks in Benghazi an “act of terror,” even as the White House disseminated the talking points about the protests.

Talking points or not, though, the media has also been reluctant to point out that Amb. Rice did, in fact, acknowledge the distinct possibility of some sort of al Quaeda involvement on one of those Sunday shows, during this exchange with CBS News’ Bob Schieffer:

BOB SCHIEFFER: Do you agree or disagree with him that al Qaeda had some part in this?

Whatever you think the talking points revisions prove, Dr. Rice’s comments to Schieffer seem to pretty clearly rule out the idea of a “cover-up” of possible al Quaida involvement.

Instead of worrying about reporting “both sides” of this story, straight reporters like Martha Raddatz should concentrate on just reporting all of the facts. The real ones.