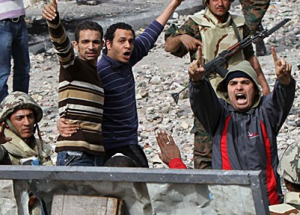 ABC News reports its producer Brian Hartman, along with photographer Akram Abi-hanna and two other members of the ABC News crew, were surrounded by a group of angry men on a crowded road that leads from Cairo’s airport to the city’s downtown area. The men kidnapped Hartman and crew and threatened to kill them. “We thought we were goners,” Hartman said later. “We absolutely thought we were doomed.”

Hartman said it became clear immediately that the men intended to do them harm:

“They directed our driver to take us down a dark, narrow alleyway. A man sitting next to me with a cigarette dropping ashes on my shoulder….No way, we can’t go down this alley, I told our driver, and he turned off the car.”

The two vehicles were quickly engulfed by men who poured out of the alley. “It gradually escalated, the tension and anger in their voice…. It was pretty clear we were in a threatening situation. People were making gestures and putting their fingers under my throat” and making a slitting motion, he said.

“A man in police uniform came up to me and said, ‘So help me God…. I am going to cut off your head,'” Hartman recalled.

Hartman later reported the incident–and credited his photographer for negotiating their way to safety–via Twitter: “The men released us only after our camera man appealed to the generous spirit of the Egyptian people, hugging and kissing an elder.”

In a subsequent incident, ABC’s Christiane Amanpour was also surrounded on a roadway (the very same that Hartman had been kidnapped from), but escaped. The potential attack was relayed to ABC executives in New York with brief comments made on a phone call:

“We’re in trouble on the bridge,” was all that was initially said. The bridge is on the same road where Hartman and Abi-hanna were carjacked.

Then cryptically, “We have to go.”