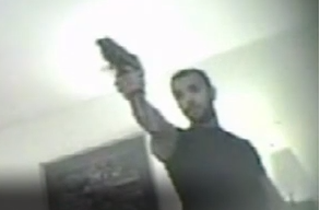 After weeks of terror attacks around the globe, and at least one plot recently foiled in the US, the FBI released this video from a 2012 arrest that shows just how easy it could be to plot a terror attack.

The video is part of evidence collected against Amine El-Khalifi, a 29-year-old who had plotted to attack the US Capitol in 2012 using a suicide vest and an automatic weapon. In the video, he meets with several undercover agents, from which he procures bombs and receives guns.

At one point, they all go shopping for nails for a nail bomb and test it out in a West Virginia quarry. Upon watching the bomb explode, Khalifi, a DJ, exclaims: “Brother, this is not strong enough.”

As an FBI agent told ABC:

“It’s a striking moment,” the current head of the FBI’s Washington Field Office, Assistant Director In Charge Andrew McCabe, told ABC News’ Pierre Thomas in an exclusive interview. “Theme that you have to take away from seeing a tape like this is the understanding that these folks are out there.”

McCabe said “recent developments around the world,” such as the deadly assault on a satirical magazine in Paris two weeks, further highlight the evolving threat from terrorists…

“We don’t even consider the use of these sorts of undercover strategies until we are convinced that the [suspect] clearly intends to do what they said they intend to do,” McCabe said, adding that suspects are always “many, many opportunities to back away from their plans.”

“And time and time again, the subjects we’re most concerned about say very clearly they intend to go forward,” according to McCabe.

El-Khalifi eventually pled guilty to one count of trying to use of a weapon of mass destruction.