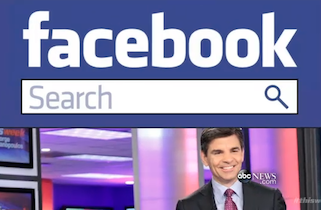 This Week announced a new feature Sunday morning, the “Find of the Week,” in partnership with Facebook, in which it culls stories from what’s trending on the social media platform. The idea of snatching stories from what bubbles up amongst organic conversations is appealing, especially as it could counteract the top-down model of narrative construction in which the Sunday shows promulgate stories and viewpoints of interest to narrow group of Beltway pundits. (See “invading Iraq, arguments for.”)

Instead, ABC News used Facebook to find…the story of a 9-year-old girl accidentally killing her shooting instructor with an uzi. You might recognize this story from literally every news outlet in any medium in the past week. In fact, This Week’s intro used news clips of ABC News’ Diane Sawyer explaining the story. This seems to make the entire Facebook-trending excursion a tad pointless, no?

ABC News could have followed up this segment with some social media analysts explaining why this local news story in particular took off online, or whether the virality of #gunfail videos might throw the stagnating discourse over gun control discourse for a loop, or whether social media keeps stories in currency for longer than the traditional news cycle.

Instead, the roundtable spat out gun control talking points predictable to their partisan persuasions. The next segment was about immigration, and appeared to drop the pretense of trending altogether, as the news about immigration this week was largely inside baseball. There followed a roundtable immigration discussion that could have been had at any point, on any show, in the past twelve months.

In short, the segment was identical to what it would have been without the Facebook brand synergy. The idea of using social media metrics to bring to the surface stories important to the audience but undercovered by major news outlets is a good one. But ABC News is just highlighting stories it’s already reported on.

Watch more news videos | Latest from the US