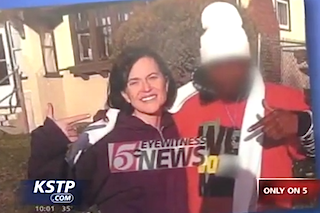 A casual photo that Minneapolis Mayor Betsy Hodges took with a campaign volunteer this week has exploded into a full-blown scandal — complete with the hashtag #pointergate — after ABC station KSTP-TV ran a news story suggesting she was “flashing a known gang sign” with a convicted felon. Either that, or they were just pointing at each other.

Navell Gordon, the man pictured with Mayor Hodges, is currently on probation, but he is also a volunteer for a non-profit group called Neighborhoods Organizing for Change. But according to KSTP, unnamed law enforcement sources are “fuming” over the photo that they believe put the public and police in Minneapolis “at risk.” They could not come up with any evidence that Gordon belongs to a gang.

The station found one retired policeman to weigh in on the non-story, accusing the mayor of “showing solidarity with the gangs” and “legitimizing these people who are killing our children in Minneapolis.”

Why would Mayor Hodges flash gang signs with 2x convicted felon? Find out why police are fuming in ten minutes on 5 at ten.

Hodges’ spokesperson submitted this statement from the mayor on the matter, which does not address the photo specifically:

“My job as mayor is to be as accessible as possible to the residents of Minneapolis, and help build relationships and trust in every community in our city. I constantly meet people and organizations who are working to make our communities stronger, including last weekend, when other community leaders and I joined members of Neighborhoods Organizing for Change to increase voter participation in North Minneapolis. It was a diverse group, including people who have made mistakes in their past. The more supportive that we all can be of people who are making better choices now, the better off we all will be in the future.”

In addition, Neighborhoods Organizing for Change released a video that includes the moment the photo was taken, in which you can see Hodges and Gordon awkwardly deciding how to pose at about the 30 second mark:

In response, people on Twitter have started using the #pointergate hashtag to show just how common and unthreatening their pose of choice really is:

#pointergate would be lols except real gang violence isnt. How can mpd keep kids safe if they can't tell the diff? pic.twitter.com/EWFA7DckB4

The youth of North Minneapolis are all in gangs. #pointergate pic.twitter.com/tupILnO7dc

.@ShaunKing @deray I didn't know this guy was the most dangerous man alive. #pointergate pic.twitter.com/tSCI6pQc99

What????? I had no idea the Trumpster was in a gang. Thanks for "pointing" this out to me @KSTP. #pointergate pic.twitter.com/eryJGEcM4O

Watch the news report below, via KSTP-TV: