ABC vs. RNC: Who Gets to Decide if Stephanopoulos Moderates GOP Debate? 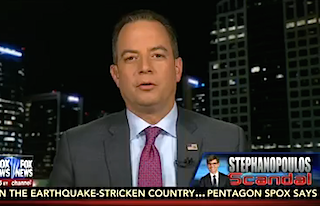 After ABC News’ George Stephanopoulos apologized for failing to disclose $75,000 in donations to the Clinton Foundation over the last three years, Republicans like Sen. Rand Paul (R-KY) said he should not be allowed to moderate ABC News’ scheduled GOP debate next year due to this “conflict of interest.”

Shortly after, Stephanopoulos took the step of recusing himself from that potential position, saying although he believes he could do so “fairly” he does not want to distract from the proceedings. But even if the revelations about his donations had never come to light, would he have been in a position to moderate the debate in the first place?

RNC chairman Reince Priebus says no. During an appearance on Fox News’ Hannity last night, he said, “George Stephanopoulos was never going to moderate a Republican debate anyway.” Asked by Sean Hannity if he had expressed this sentiment to ABC, he replied, “I’ve said it to ABC, I’ve said it to everybody.”

But when The New York Times’ Jeremy W. Peters confronted ABC with this news on Friday, they told a different story. “ABC News decides who moderates ABC News debates,” the network said in a statement. In other words, it is not the RNC’s decision to make.

“The G.O.P. primary debate is nine months away,” ABC added. “Before George recused himself, we hadn’t made any decisions about our debate coverage team.”

A tentative 2016 GOP debate schedule, shared by reporters on Friday, includes one ABC News debate on February 6, 2016 at St. Anselm’s College in Manchester, New Hampshire. Between August of this year and March of next, there are 13 total debates listed, four of which will be moderated by Fox News or Fox Business and three of which will be hosted by CNN in conjunction with the conservative Salem Radio network.