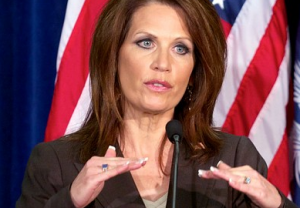 TIME‘s Michael Crowley says “it’s not easy to get to Michele Bachmann.” Not in the sense of getting under her skin, but literally getting close enough to throw a question at her. As Crowley writes, “Her appearance at a rally on Tuesday in Aiken, S.C., attended by perhaps 150 people, featured three uniformed police officers and two plainclothes bodyguards. One of those guards spent much of the day preventing reporters from getting too close to the candidate.” Of course, ABC News chief investigative correspondent Brian Ross can’t be discouraged by mere bodyguards.

Here’s what happened Tuesday when Ross tried to ask Bachmann a few questions about the reports she suffers from debilitating migraines:

Ross dashed after Bachmann, repeatedly asking whether she had ever missed a House vote due to a migraine. She ignored him. Ross pursued her into a parking area behind the stage. Her aides grew alarmed. When Ross made a beeline for the white SUV waiting to carry Bachmann away, two Bachmann men pounced on him, grabbing and pushing him multiple times with what looked to me like unusual force. In fact, I have never seen a reporter treated so roughly at a campaign event, especially not a presidential one. Ross was finally able to break away and lob his question at Bachmann one more time, but she continued to ignore him.

Afterward, I asked Ross — a hard-nosed pro who nevertheless seemed slightly shaken — whether he had ever been treated so roughly. “A few times,” he told me. “Mostly by Mafia people.”

Watch Ross discuss the incident while appearing on The View: