ABC’s Dan Abrams Predicts DOJ Will Not Charge Zimmerman: ‘They Won’t Win And They Know That’
VIDEO

ABC’s Dan Abrams Predicts DOJ Will Not Charge Zimmerman: ‘They Won’t Win And They Know That’ 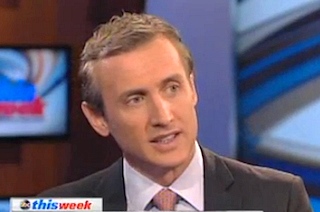 ABC News Chief Legal Affairs Anchor and Mediaite founder Dan Abrams appeared on ABC’s This Week predicted that the Department of Justice would not file charges against George Zimmerman, despite the outrage following Saturday night’s acquittal and pressure from the NAACP.

“There will be a federal investigation, they will publicly discuss it, and there will not be charges filed,” Abrams said. “They can’t win in this case. They won’t win, and they know that.”

Abrams drew a line between the legal and moral aspects of the case.

“There are two separate questions here that we’re discussing, and I think it’s important to distinguish them,” Abrams said. “One is a sort of broad societal right and wrong, and what is wrong with our society. That is a fair question to ask. But that is a different question than talking about what happened in that courtroom.”

“But every time we get to that nexus, we never seem to accept the fact that race in this country is real, that color will get you killed,” Tavis Smiley responded. “I believe in looking at a case by case situation, but in the aggregate, every time we have this issue, somebody can always explain away why this person got off, why this person was not found guilty, and what we have is a bunch of dead black men.”

Host George Stephanopoulos asked Abrams if the Zimmerman acquittal or the anger surrounding it would have any bearing on future Stand Your Ground cases, or possible repeal of the law.