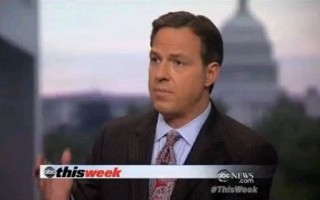 On ABC’s This Week Sunday morning, campaign advisors to President Barack Obama and Mitt Romney went head-to-head over the perceived lack of substance in the campaign thus far, each accusing the other candidate’s side of focusing on “very small” issues as opposed to ones with actual substance.

Fill-in host Jake Tapper began by confronting Obama deputy campaign manager Stephanie Cutter about the president’s reference last week to the Romney family’s late dog Seamus, whose cage was once strapped to a car roof during a family vacation.

“I’ll leave it for others to decide whether it was appropriate, but it was a light-handed remark,” Cutter defended, then focusing attention on the media’s coverage choices: “What you didn’t cover is, what the president was actually saying in Iowa.”

“The president is out there every single day talking about where he wants to take this country,” she explained. “Just yesterday in New Hampshire, he absolutely contrasted his plan for Medicare with Mitt Romney and Paul Ryan’s plan for Medicare. And that’s a central question on the table in this election.”

“We’re happy to have a substantive debate, but we need some substance on the other side,” Cutter said, turning the blame on Romney’s team. That prompted Romney adviser Kevin Madden to fire back that it is the Obama campaign that has focused on “very small things.”

Madden then laid out what he saw as stark contrast between the two campaigns: “Congressman Ryan was down in Florida yesterday talking about Medicare, which is a very important issue. It’s a very important cost-of-living issue for millions of seniors across this country,” he said. “At the same time this week, Vice President Biden was in Virginia talking about people being put back in chains.”

Madden also hit at the Obama campaign for doing local interviews some have criticized as lightweight in substance:
“[Romney] was actually talking about coal, and how the coal industry is vital for people in Ohio whose jobs depend on it … also talking about Medicare and also talking about putting people back to work in this country,” he said. “At the same time, President Obama is talking to disc jockeys in New Mexico about what his favorite chili is.”

“This election about big things and they’re focused on very small things,” Madden said of the Obama campaign. “I think, come November, we’re going to be in a better position with the American electorate because we’re talking about the big issues that matter to people every single day.”