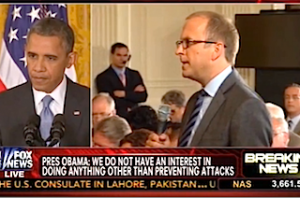 ABC News’ Jonathan Karl used his press conference opportunity Friday afternoon to challenge President Obama on his use of the word “decimated” to describe Al Qaeda’s core leadership. While Obama maintained that “core Al Qaeda is on its heels” he also said that other extremist “regional groups” continue to “pose significant dangers.”

“Now that we have seen this terror threat that resulted in embassies closed throughout the Arab world, much of Africa,” Karl asked, “do you still believe that Al Qaeda has been decimated?” He also tacked on a question about drone strikes in Yemen over the last couple of weeks.

The president reiterated what he said during his speech to troops at Camp Pendleton Wednesday. “Core Al Qaeda is on its heels, has been decimated. But what I also said was that Al Qaeda and other extremists have metastasized into regional groups that can pose significant dangers,” Obama said. “Although they are less likely to be able carry out spectacular homeland attacks like 9/11, they have the capacity to go after our embassies.”

“It is entirely consistent,” Obama continued, “to say that this tightly organized and relatively centralized Al Qaeda that attacked us on 9/11 has been broken apart and is very weak and does not have a lot of operational capacity. And to say we still have these regional organizations like AQAP [Al Qaeda in the Arabian Peninsula] that can pose a threat and drive potentially a truck bomb into an embassy wall and can kill some people.”

We are not going to completely eliminate terrorism,” Obama said. “What we can do is weaken it and strengthen our partnerships in such a way that it does not pose the kind of horrible threat that we saw on 9/11.”

When Karl attempted to follow up with his question about specific drone strikes, the president forcefully responded, “I will not have a discussion about operational issues.”