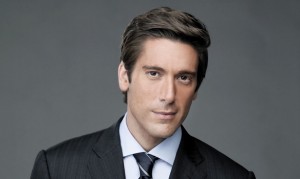 One week may have been a fluke, but two in a row looks a lot like a pattern. For the week of April 6 through 10, ABC’s World News Tonight with David Muir was #1 in both the total viewer and 25-54 demo ratings, beating NBC Nightly News with Lester Holt for the second consecutive week.

World News Tonight even managed to widen the gap week-to-week with NBC Nightly News. While just 84,000 total viewers separated the two shows the week prior, last week that divide grew to 228,000. In the demo, ABC’s lead grew to 190,000 last week compared to 161,000 viewers for the week ending April 3.

Last week marked the first time in more than seven and a half years that ABC beat NBC in all key demos for two weeks in a row. And while ABC’s broadcast was up 15% in total viewers and up 11% in the demo compared to the same week last year, NBC was down 2% across the board.

When Brian Williams was first suspended from NBC Nightly News just over two months ago, his absence did not immediately appear to have a negative effect on the show’s ratings. But while Lester Holt has been doing an admirable job taking the reins, the debacle may finally be catching up with the network.

If Muir can pull off a practically unprecedented third consecutive weekly win, it will further confirm the trend that NBC feared might happen in Williams’ wake.