Accused Boston Bombers’ Aunt Accuses Gov’t Of Setting Them Up: ‘You Do The Math’
video

Accused Boston Bombers’ Aunt Accuses Gov’t Of Setting Them Up: ‘You Do The Math’ 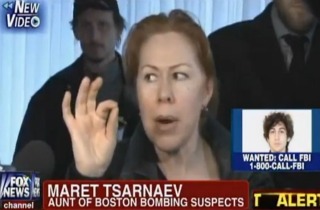 Maret Tsarnaev, the aunt of the two suspects in the bombing of the Boston Marathon, spoke to reporters on Friday and expressed strong doubts that either of the two brothers accused of conducting the terror attack in Boston on Monday were involved. She told reporters that she is concerned a conspiracy had been orchestrated to implicate her nephews in the bombing.

RELATED: Bomber’s Father Issues Warning To U.S.: If My Son Is Killed, ‘All Hell Will Break Loose’

Tsarnaev began by telling reporters that she contacted the FBI voluntarily in spite of her reservation that the charges against her nephews were legitimate. She went on to say that the evidence presented against the Tsarnaev brothers is, in her opinion, thin.

“Could it be staged?” Tsarnaev asked reporters “I have to question everything. That’s my nature.”

“I am suspicious that this was staged. The picture was staged,” she added of the surveillance video released by the FBI on Thursday.

“By who?” a reporter asked.

“Whoever is looking for those who need to be blamed for these attacks,” she replied.

“You think they’re being set up by someone else?” another reporter inquired.

“What do you mean, ‘someone else?’” Tsarnaev shot back. “Who is interested in this case? When you’re blowing up people and you want to bring attention to something for some purpose… you know, you do that math.”

“I’m used to being set up,” she continued. “Before I left former Soviet Union countries, that’s how I lived.”

“I am a Chechen. I have to prove myself twice – triple times more than Kyrgyz or Kazakh who live on their own land,” Tsarnaev said.

Watch the tape below via Fox News Channel: