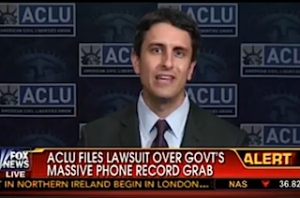 As many pundits have been pointing out over the last several days, the NSA leaks concerning widespread surveillance of all Americans has created some strange bedfellows. But now it has also created some unexpected enemies. The American Civil Liberties Union, often viewed as a liberal institution, has filed a lawsuit against Obama administration officials that claims the NSA’s “dragnet” data collection is illegal and should be stopped.

ACLU spokesperson Alexander Abdo announced the lawsuit on Fox News with Neil Cavuto this afternoon, saying the government “shouldn’t be indiscriminately sweeping up the communications of millions of innocent Americans.” He called the revelations last week about large-scale surveillance programs by the NSA “unconstitutional and un-American.”

“For 200 years, our government has been able to keep us safe while staying true to” the values in the Constitution, Abdo said. “There’s no reason we need to sacrifice those values now.” When presented with the irony of his organization suing President Obama‘s administration after previously finding so much common ground with Senator Obama, Abdo said the explanation lies in the “seductive” nature of power.

“Power can be seductive and especially in the era of Big Data,” he said, “where it’s increasingly easy for the government to aggregate all sorts of information about Americans.” Abdo added, “It’s understandable that the government is trying to do this, but it’s simply not constitutional.”

Read the ACLU’s full complaint below: