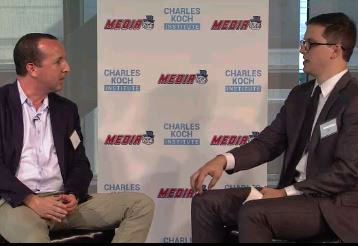 Following his discussion with former ambassador John Bolton at the Mediaite/Charles Koch Institute-sponsored event Tuesday evening, Mediaite’s Andrew Kirell continued the conversation on the privacy and security debate with Ben Wizner, the director of the ACLU’s Speech, Privacy, and Technology Project. Wizner said the country should welcome the conversation, but shot down the idea the government wanted to have it at all, since at every level (all three branches, the FISA court, etc.) the government has done everything possible to keep these programs out of the public eye, even as they assert the legality of what they are engaged in.

Wizner told Kirell the congressional checks on the program are insufficient, and the oversight that currently exists is toothless to a certain degree, especially considering the FISA court basically acts as a rubber stamp. He explained that whenever the ACLU and other groups challenge these programs in federal courts, the government declares they have no standing. He asked why, if the government is so confident about the legality of these programs, they don’t allow any serious legal challenges to it.

Kirell noted that the “surveillance” programs revealed are just data collection, and the government cannot just look at all the call or e-mail content they want. Wizner warned of a slippery slope where the government holds all this information but assures the public they don’t actually listen to it. He argued the framers of the Constitution believed that a too-powerful government was a bigger problem than a government too limited in scope.

Wizner also shot down the straw man argument that privacy advocates oppose all surveillance, saying the real question is “under what rules” the surveillance is conducted. Kirell asked about the obligation of journalists like Glenn Greenwald to act on secret information like the NSA revelations. Wizner explained that The Guardian didn’t just release everything willy-nilly, they met with the government regarding some of the Snowden documents and heard them out.

Wizner pushed for more transparency, even though that one thing by itself is “not sufficient,” and noted that even a liberal president like Obama support these programs because they have national security advisors who wear them down until they accept the current apparatus and don’t try to reign it in.

Watch the full interview below: