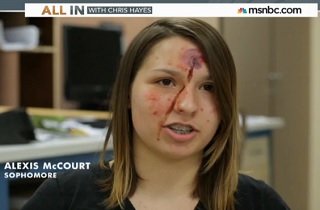 One year ago, in the emotionally smoldering aftermath of the horrific mass shooting at Sandy Hook Elementary School, there was a national conversation about measures like universal background checks and an assault weapons ban that would have also limited the size of magazines. The national media has since moved on, but on Friday night’s All In with Chris Hayes, host Chris Hayes started the conversation again, noting a drastic turn in its direction.

A little over a year later, the only gun regulations to pass congress during President Obama’s presidency remain measures that expanded gun rights, including one that allows the carrying of firearms in national parks. Instread, as NBCNews.com reporter Nona Willis Aronowitz discovered, states like Missouri are making laws requiring schools to conduct active shooter drills, in order to better acclimate teachers and students to the uninterrupted flow of firearms and ammunition to anyone and everyone who wishes to purchase them. Aronowitz traveled to Troy, Missouri to report on one such drill, along with harrowing video, at roy Buchanan High School.

The video is at once disturbing and electrifying, often shot from the first-person shooter point of view that we’ve all grown accustomed to in videogames. You can see Hayes’ full segment here, but what I found remarkable was the moment, just after the video package finished and Aronowitz was introduced, when Hayes reacted to the video. Clearly fighting emotion with something like a nervous laugh, he told Aronowitz that “I’m actually sort of, like, upset by just rewatching that footage.”

Hayes had presumably seen Aronowitz’s report over and over again (he had teased her report on Thursday night’s program), yet the shock of it was still raw enough to elicit that fleeting reaction. It’s probably tempting for Hayes’ detractors to roll their eyes at the bleeding heart, but it would be tough to imagine any human being not having some sort of strong reaction to the report. Chris Hayes is still a relatively new father whose daughter was barely a year old when all of those souls were lost at Sandy Hook. He still hasn’t experienced sending his child off to school to be trained in the ways of effective sitting-duckery.

But tens of millions of other parents have. Even before Sandy Hook, my school-age children experienced an actual active shooter lockdown when a man with an AR-15 was at large after killing two people, and was found hours later, dead by his own hand. During that lockdown, the armed policeman who guards each of the schools in my town was cold comfort, a slightly more well-armed duck sitting between the gunman and my kids.

The images in that video are a manifestation of the ghostly visions that must haunt every parent who walks the halls of their own children’s schools for parent-teacher night, or other such occasions, assessing the strength of the doors, the avenues of escape, and the places to wait. Finally, you shut them out with some version of a prayer.

As Hayes notes, the mathematical odds of being hurt or killed in a school shooting are pretty long, but to the victims of the 44 school shootings since Sandy Hook, and to those of the next 44, we owe more than that silent prayer and the luck of the draw. We need to honestly ask “Is this all we can do?”