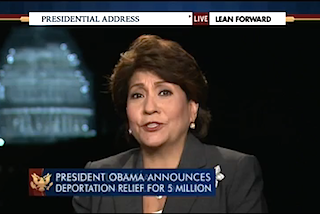 When Janet Murguía, president of the nation’s largest Latino advocacy group, the National Council of La Raza, delivered a speech at the annual Capital Awards dinner last March, she labeled President Barack Obama the “deporter-in-chief.” But when Murguía joined MSNBC’s Rachel Maddow and Chris Hayes immediately following the president’s address to the nation on immigration Thursday night, she expressed a very different outlook.

“I thought it was very compelling, very powerful and very reaffirming,” Murguía said of Obama’s speech, in which he formally announced his executive action that will protect up to five million undocumented immigrants from deportation. “For us, this moment is a milestone moment I think for so many. It’s a victory for so many American families who have lived in the shadows with the burden of what that means in this country.”

“I think it was a victory for common sense,” she continued. So this is a very important moment, nott just for some of us who have been fighting alongside so many others for some change and reform. But it’s really, I think, an important moment for the country.”