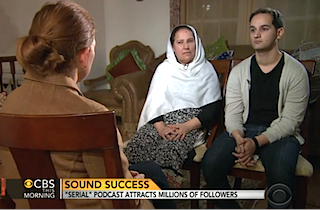 Over the past nine weeks, Serial, a spin-off of This American Life, has single-handedly revolutionized the podcast industry. The audio episodes are released once a week and collectively tell the true story of a 1999 murder that left 17-year-old Maryland high schooler Hae Min Lee dead and her ex-boyfriend Adnan Syed in prison for life.

But as producer and host Sarah Koenig has uncovered over the first nine episodes, there is much more to this story than meets the eye. And the addictive nature of the narrative has helped propel Serial to the top of the iTunes podcast charts and even inspired its own spin-off podcasts from The A.V. Club and Slate.

Now, for the first time, Adman Syed’s family is speaking out about the surreal experience of having a country obsessed with the murder 15 years later. His mother and younger brother spoke to CBS This Morning’s Jan Crawford on Thursday.

“It seems like yesterday. It’s hard to think back that I once had a family. It was all taken away,” his brother Yusef said. Like so many other Americans, he and his mother get up early on Thursday mornings to listen to the new episodes that try to get to the bottom of whether Adnan, who has always maintained his innocence, has been wrongly imprisoned.

“I wake up as soon as they put it on and I’ll listen to it,” Yusef said. “It’s different. On some days I will be like, ‘Oh this is a really great episode.’ And some days I’ll feel so down and depressed.” He added, “We are just so thankful that the story is out there.”