‘Affluenza’: Rich Teen Gets Light Sentence for Murder After Claiming He’s Not Used to Consequences 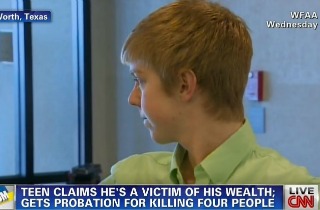 The extraordinary case involving a Texas teenager who was not sentenced to prison after he drunkenly drove into and killed four people is creating a national cry for justice. 16-year-old Ethan Couch received a light sentence after his attorney and experts testified in court that the teen suffered from “affluenza” and has never had to suffer any consequences for his actions. Many are expressing outrage over a sentencing that they say would have been far harsher had Couch been poor and a minority.

CNN reported that Couch, a teenager too young to drive legally, violated a number of laws when he killed four people in a drunken driving accident. Nor is it his first offense. At the age of 15, he was caught by police with a naked 14-year-old girl in a parked pickup truck.

“A psychologist and defense witness testified the boy suffered from something called ‘affluenza,’ a lifestyle where wealth brought privilege and there were no consequences for bad behavior,” reported CNN’s Randi Kaye. The prosecution sought 20 years for Couch’s multiple violations, but the teen only received 10 years probation and a mandatory stay in a rehabilitation facility.

“It doesn’t really exist,” said former prosecutor Sunny Hostin of the affliction ‘affluenza.’ “We in the legal community have often said there’s this disparity between wealthy kids, people in general, and poor people. You see that play out in the system. Now, we actually have a name for it.”

HLN host Jane Velez-Mitchell agreed. “The entire criminal justice system has ‘affluenza,’” she charged. “We have a prison-industrial complex that is replete with institutionalized racism and classism, and we have to do something about it.”